Justin Walters, an active duty Army infantryman who was deployed twice to Afghanistan, is accused of shooting his wife and a state trooper to death.

The double murder occurred on July 9, and Walters, 32, surrendered at the scene in Theresa, New York.

The slain trooper was identified as Joel R. Davis, a married father of three and youth baseball coach. Walters is also accused of killing his wife Nichole V. Walters, 27, the state police announced. Her Facebook page is filled with comments about loving her husband. The couple had a small child.

In a news release, the state police revealed that Walters is an active duty soldier in the U.S. Army.

“Walters is an active duty Army infantryman who is stationed at Fort Drum,” the news release said. According to reporter Jenn Schanz, “Army records show Staff Sgt. Justin Walters is from Zeeland, Michigan. He arrived at Fort Drum in 2007, did two tours in Afghanistan.”

Fort Drum is an Army base located in northern New York near the Canadian border.

“Fort Drum officials said Walters, of Zeeland, Michigan, was a combat veteran who has served at the post since joining the Army in 2007. He did one-year tours in Afghanistan with the 10th Mountain Division’s 1st Brigade in January 2009 and again in March 2011,” WoodTV reported.

Walters’ Facebook page contains only photos of him and other soldiers in Army uniforms overseas. In 2016, he wrote, next to a photo of himself in a military vehicle, “Can’t believe it’s been 7 years.” He also wrote that he had served in Kandahar in 2011.

Here’s one of the pictures on Walters’ page, which he wrote was taken in Kandahar:

Nichole posted this photo and wrote that it was of Justin’s graduation.

In contrast, his wife’s page is filled with photos of family. 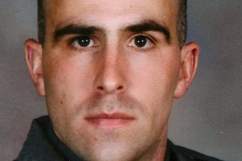 2. The Trooper Died While Responding to a Domestic Call

According to The Watertown Daily Times, Walters is accused of shooting his wife in the driveway of their home around 8:09 p.m. The couple lived at 34371 County Route 46.

That’s when Trooper Davis was called to the scene.

“We have numerous calls hearing gun shots prior to the trooper arriving,” a police spokesman told the newspaper. Davis was shot once and killed at the scene.

In a statement, the New York State Police Superintendent George P. Beach III, said that Davis had “responded to a call of shots fired during a domestic dispute…while approaching the residence, Trooper Davis was shot once and killed.”

We are saddened by the loss of Trooper Joel Davis. Our condolences and prayers are w/ Davis family & our @nyspolice fam. Rest peacefully pic.twitter.com/S2F1Py8ScH

According to CBS News, “a second woman was shot, in the upper torso, police said. She was home alone but lives in a shed on the property with a man and child.”

“A woman whose family lived near the Walters’ white double-wide trailer went outside after the first shots, and suffered a gunshot wound in the upper torso,” The Watertown Daily Times reported.

3. Nichole Wrote About Her Love for Justin On Facebook & the Couple Had a Young Child

Nichole Walters’ Facebook page is filled with photos of herself with Justin and their young child. “I love him so much!” Nichole wrote in 2010, with this photo:

Justin Walters with his wife, Nichole.

In 2014, she wrote, “My little monkey turned one month today along with justin and mines six year aniversery (sic) wow where does the time go very special day for my little family i love both of them so much.”

Jerry Mikels, a friend of Nichole Walters from her hometown of Syracuse, New York, told WoodTV she “was devoted to her toddler-aged son and was always willing to help people.”

Online property records show the home where the murders occurred was purchased by Justin and Nichole Walters in 2015.

4. The Trooper Left Behind a Wife & Children & New York’s Governor Said His Death Is a ‘Sad Reminder’ of the Risks Law Enforcement Officers Face

Trooper Davis was married and had three children, according to The Watertown Daily Times. He was only 36-years-old.

According to Spectrum News, Davis was “stationed at the Philadelphia barracks in Jefferson County.”

Davis graduated from the 199thsession of the Basic School on May 29, 2013 and was originally assigned to Troop D, SP Watertown, before receiving his current assignment at SP Philadelphia, said the police statement. According to posts from friends and family members on Facebook, Davis was a youth baseball coach who mentored children both on and off the field and was remembered as a “great father” with a sweet disposition.

“The Evans Mills Youth Baseball would not be where it is now without the push and support of Joel Davis. Both on the field as a coach to many kids and behind the scenes . Rip Joel,” wrote the team on Facebook.

5. Walters Said He ‘Didn’t Know’ Why He Was in Court

According to the police statement, authorities took Walters into custody without further incident. Walters appeared in court on July 10, where is was accused of first and second degree murder.

He wasn’t wearing a shirt during the court appearance. Asked whether he knew why he was in court, Walters responded “that he didn’t know.”

This post will be updated as more information is learned about Walters and Davis.