President Donald Trump, First Lady Melania Trump, and their son, Barron Trump, boarded Marine One at the White House on Friday to head to Bedminster, New Jersey, for the Fourth of July holiday weekend. The First Family smiled and waved at cameras before boarding the chopper, heading Air Force One which would take them to their destination.

The Trumps will be staying in Bedminster until Monday. According to the Daily Mail, they will be joined by President Trump’s daughter, Ivanka Trump, her husband, Jared Kushner, and their three children. Also expected to join the First Family on their weekend holiday are Melania’s parents, Viktor and Amalija Knavs, who were also seen heading to Marine One on Friday.

As the Trumps left the White House, they were all wearing some form of red, white, and blue, likely festive in honor of Independence Day. The President wore a navy blue suit with a blue striped tie and an American flag pin adorned on his left lapel. His wife wore a white blouse with a red and white checkered skirt by Joseph Altuzarra. According to the Daily Mail, the pencil skirt retails for $895. She finished off the effortless look with a pair of white Christian Louboutin pumps. The couple’s 11-year-old son wore khaki shorts and a navy blue Ralph Lauren t-shirt.

The family will be staying at Trump National Golf Club, which is a special place, especially for Ivanka and Jared — the couple tied the knot at the club back in 2009.

It is unknown what activities the Trumps will take part in over the next couple of days. According to NJ.com, President Trump did not make any public appearances either time he visited Bedminster as president.

“During his trip to New Jersey last month, he stopped by a wedding at the club, according to Instagram posts of three people who were there. He also hosted a fundraiser for Rep. Tom MacArthur (R-3rd Dist.), who played a leading role in enabling House Republicans to pass health care legislation that Trump embraced. It was his first fundraiser for an incumbent House member.” 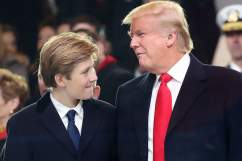 Barron Trump’s Height: How Tall Is the First Son?

Loading more stories
wpDiscuz
3
0
Would love your thoughts, please comment.x
()
x
| Reply
The Trumps will spend Fourth of July weekend in New Jersey at Trump National Golf Course. Also joining them are Ivanka and Jared as well as Melania's parents.