Now that someone from Massachusetts has won the Powerball, how long do we have to wait until it reaches $700 million or higher again?

The answer isn’t an exact science, because the jackpot amount partially depends on how many people buy Powerball tickets, combined with whether or not a jackpot is drawn. Every time a winning jackpot ticket is drawn, the Powerball starts over at $40 million.

This time around, someone bought a winning ticket for the $700 million jackpot on August 23. There hadn’t been a winner for Powerball since June 14. So Powerball went without a winner from June 14 to August 23.

If it takes roughly the same amount of time to build up to $700 million again, then we’d be looking at another Powerball jackpot of that size around November 1. However, you probably shouldn’t mark this date on your calendar. It’s actually very rare for Powerball jackpots to get this big. The Aug. 23, 2017 jackpot was the second-largest jackpot in Powerball’s entire history.

The biggest jackpot in Powerball’s history was $1.5 billion, drawn on January 13, 2016. If no one had won the Powerball this time, that $700 million would have likely rolled over into more than $1 billion. That means it would have taken a little more than a year-and-a-half to get to a Powerball that was over $1 billion a second time.

Even though the odds of one person winning are so small, part of the reason it’s tough for a jackpot to grow this large is because the larger it gets, the more people enter (and they typically buy more tickets per person too.)

Did you participate in the Powerball this time? Let us know in the comments below. 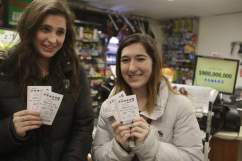 Loading more stories
wpDiscuz
0
0
Would love your thoughts, please comment.x
()
x
| Reply
How long will you have to wait until the Powerball gets to $700 million again? Longer than you might think.