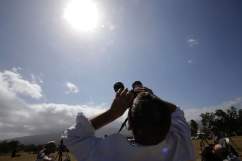 ECLIPSE TIME: For those viewing the eclipse in California, Patch.com recommends heading outside at 9 a.m. PT. The eclipse will then last approximately two hours and 40 minutes.

WEATHER: Cloudy skies are expected Monday morning in the San Diego and San Francisco areas, especially in the coastal areas.

BEST PLACES TO WATCH ECLIPSE: The NY Times reports that the eclipse will be more highly visible in Northern California, and less so as you travel south. And, towns nearest to the Oregon border will also have much better views as Oregon is one of the best states in which to view the eclipse. However, the OC Register also reports that watching the eclipse from southern California will definitely work, except in some of the beach areas. Dan Gregoria, a San Diego-based meteorologist for the National Weather Service, said that, “Your chance of viewing the eclipse rises rapidly (moving inland), especially if you are beyond 10 miles from the coast.”

TRAFFIC: Expect heavy traffic in areas with clear viewing of the eclipse.

MAPS & PATH: California is not in the path of totality.

ADDITIONAL DETAILS: In recent news, there has been a wildfire tearing through the path of totality in Oregon and many have been evacuated, according to Weather.com. Wildfires are also affecting California.

Total Solar Eclipse Weather Forecast on Path for the Day 2017

Solar Eclipse Glasses: How to Safely Use for Viewing the Sun

Read More
Solar Eclipse
What time is the total solar eclipse in California today? Get the details on whether it's a total or partial eclipse in the state.