If you decided not to brave the traffic of heading to north Georgia, you are still in luck. Atlanta is close enough to the prime eclipse areas to still get a good view of history.

Times are within a few minutes for all three categories in surrounding cities as this chart shows:
https://twitter.com/GAFollowers/status/897563721232515072

Many in the ATL stayed home fearing a traffic scenario similar to the 2014 Snowpocalypse.

The worst #Eclipse2017 traffic jams so far appear to be people trying to leaving Atlanta and Charlotte. pic.twitter.com/Zjlkhod7UZ

While we recommend to stay where you are at this point for the best chance to enjoy the eclipse, Heavy broke down the top cities to view the eclipse in Georgia. Cities in the northern part of the state bordering on South Carolina were regarded as the best areas for viewing.

Blairsville, Clayton and Dillard were three of the cities that made the list. Plug your address into this NASA map to find out how your location rates to view the eclipse.

NASA says that the best Georgia eclipse totality viewing spot is Black Rock Mountain State Park, just south of the North Carolina border. The best route to excellent eclipse-viewing real estate will be where traffic is worst. Eclipse2017.org shows that the far northeast corner of Georgia – Toccoa, Blairsville, Clayton (the city), Lake Hartwell – will be the only area with true total blockage of the sun during the eclipse. A straight shot up I-85 may be alright through Gwinnett, but once it files down to two lanes above I-985, the crawl could begin. And I-85 stays as two lanes in each direction all the way into South Carolina. Mix in the fact that express toll lane construction starting at Hwy. 317 (exit 111) eliminates shoulders and narrows the lanes and the possibility for even worse delays materializes…

One reason the infamous Snow-pocalypse 2014 became such a traffic nightmare is because so many people tried to do the same thing at once (go home). And they did so in very strange, unfamiliar conditions (ice and snow). The 2017 Total Solar Eclipse will probably not amount anywhere close to that horrible January 2014 day. But if we as commuters fly by the seats of our pants, the eclipse will really burn our commute. And there aren’t any special glasses to stop that.

Here was Twitter’s reaction to the potential Atlanta traffic nightmare:

Does #Apoceclipse refer to something other than the inevitable catastrophe that Atlanta traffic will be this afternoon?

god the eclipse in atlanta is supposed to be nearly 99% totality but me? driving in atlanta traffic? i'll pass

I-85 N out of Atlanta and I-85 S out of Charlotte really rough with eclipse traffic. pic.twitter.com/UBkPgt7FMP

Can we have an #eclipse every day? No traffic on Atlanta interstates. 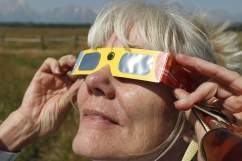