Hurricane Maria could potentially result in “catastrophic” damage to Puerto Rico. According to CNN, the hurricane is now rising to speeds of 165 mph. “No generation has seen a hurricane like this since San Felipe II in 1928,” said Puerto Rico Gov. Ricardo Rosselló. “This is an unprecedented atmospheric system.”

To cope with this worrisome situation, the internet has seen fit to take Hurricane Maria and provide comic relief through a series of memes.

My reply when @chrisnickinson sent a #HurricaneMaria model: "Almost looks like a shrimp? before it got fried." Even sent the shrimp pic??‍♀️ pic.twitter.com/uafmMzblDP

Granted, these memes aren’t referencing the damage that Hurricane Maria is predicted to inflict on Puerto Rico, but rather the many puns and pop culture references that online users have concocted.

The most common references have been to famous characters named “Maria”, most notably in the classic musicals West Side Story (1961) and The Sound of Music (1965). In the former, Maria, played by Natalie Wood, is a Puerto Rican immigrant who gets serenaded by her lover Tony. The beloved song and film have subsequently taken on a whole new meaning.

If there aren't west side story memes to joke about the hurricane as a coping mechanism, I've lost hope in society.

Maria spinning into the islands like ? … (low key can't wait for all the West Side Story gifs) #HurricaneMaria pic.twitter.com/6O0z979Wyl

Someone else went as far as to rework other lyrics to say “How do we catch her clouds and pin them down?”

Outside of these recurring points, there have been more subtle, memes that have made their way online as well. One user harkened back to Ricky Martin‘s 1995 single “Maria” with the lyrics “Vete pal carajo Maria” which basically translates to “go screw yourself.”

The Miami Herald went one step further, and compiled an all “Maria” playlist, with songs from Martin, Blondie, and Carlos Santana. Check it out here. other deep references include pro golfer Jose Maria Olazabal and the Brooks & Dunn song “My Maria.”

Of course, given the frequency with which Hurricane Irma, Hurricane Jose, and now Hurricane Maria has struck, several memes were dedicated to just how surreal the whole situation is.

One meme posted a photo of Squidward from Spongebob Squarepants with the caption: “Floridians finding out Hurricane Maria is on its way after Irma just hit last week.” Another went as far as to personify the hurricanes outright.

Check them out below.

Some of the Hurricane Maria memes are becoming too much
?? pic.twitter.com/F1HCpDEFcK 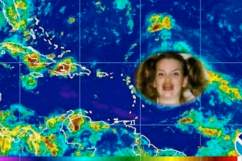 Hurricane Irma: All The Memes You Need to See