With the first Hurricane Watches for Florida already issued by the National Hurricane Center in Miami, it’s important to understand the difference between a hurricane watch and hurricane warning before Hurricane Irma hits the Florida Keys. The two notifications are different.

As the National Oceanic and Atmospheric Administration explains, a hurricane warning means that hurricane conditions are expected within the area. Hurricane “conditions” are defined as sustained winds of 75 mph or higher. Hurricane warnings are issued 36 hours before the storm is anticipated to make impact because it is difficult for people to prepare for a storm once winds hit between 39 and 73 mph, or tropical storm force levels.

After a hurricane warning is issued, residents should be prepared for the storm and need to leave the area if already directed by officials. Florida Keys officials began telling residents and tourists to leave earlier this week. Evacuation of tourists started on Wednesday.

Meanwhile, a hurricane watch means that hurricane conditions with sustained winds of 73 mph or higher are possible within the area. Warnings are issued 48 hours in advance, before tropical storm force winds reach the area.

After a hurricane watch is issued, residents should start preparing their homes and getting evacuation plans ready. Residents should also listen closely for instructions from local officials.

The 8:00 a.m. ET public advisory from NOAA reports that Irma is a Category 5 hurricane, with maximum sustained winds of 180 mph. It is less than 200 miles north of Punta Cana, Domincan Republic and is moving at 17 mph. Hurricane watches are in effect for parts of Cuba, while hurricane warnings are in effect for parts of the Bahamas, Tucks & Caicos, parts of Haiti and parts of the Dominican Republic. The cone map shows that Irma is predicted to reach the Keys Monday morning.

Irma has already left Puerto Rico and other Caribbean islands devastated. CNN reports that there have been nine deaths throughout the Caribbean. Prime Minister Gaston Browne of Antigua and Barbuda said that Barbuda is “literally a rubble” and facing “total devastation.” 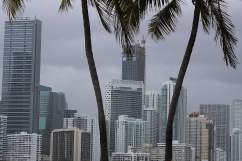 Loading more stories
wpDiscuz
0
0
Would love your thoughts, please comment.x
()
x
| Reply
Since the first hurricane watch and warnings for Florida from Hurricane Irma will be posted on Thursday, here is a look at the difference between them.