As of September 9, there was a hurricane warning for Orange County, including Orlando. That had worsened from just hours before, when there was only a hurricane watch for Orlando and Orange.

The National Weather Service has a nearly real-time database of hurricane watches and warnings.

Hurricane conditions are listed as possible for Orlando on Sunday, Sunday night, Monday night, according to the September 9 extended forecast. Follow the radar for Orlando here. Track the hurricane by infrared satellite here.

The Orlando extended weather forecast for the morning of Saturday September 9.

The database is updated every two-three minutes, so for the most current information you can click on the link provided above. “Hurricane Irma will produce dangerous storm surge up to 12 feet, very heavy rainfall, inland flooding and short lived tornadoes in Florida this weekend. In the southern part of Florida, rainfall totals could approach 20 inches. Irma is expected to track north through Florida this weekend and into Georgia by Monday,” The National Weather Service wrote on September 9.

Some forecast models, though, showed the hurricane is shifting westward and could imperil the west coast of Florida more than previously thought. However, only a slight error or another shift could change things, so all of the models should be recognized as unpredictable projections. Furthermore, all of the state is in peril from a storm this size.

“A Hurricane Watch is issued when a tropical cyclone containing winds of 64 kt (74 mph) or higher poses a possible threat, generally within 48 hours. These winds may be accompanied by storm surge, coastal flooding, and/or river flooding.

The watch does not mean that hurricane conditions will occur. It only means that these conditions are possible.”

“A Hurricane Warning is issued when sustained winds of 64 kt (74 mph) or higher associated with a tropical cyclone are expected in 36 hours or less. These winds may be accompanied by storm surge, coastal flooding, and/or river flooding. A hurricane warning can remain in effect when dangerously high water or a combination of dangerously high water and exceptionally high waves continue, even though winds may be less than hurricane force.”

The National Weather Service wrote on September 9: “Dangerous Hurricane Irma continues to move west-northwest along the north coast of Cuba. Irma is expected to turn toward the north-northwest later today and then cross the Florida Keys as an intense hurricane early Sunday morning. Irma is forecast to move north and reach the southwest Florida coast Sunday evening as a strong hurricane, and then move northward across the western peninsula through early Monday morning.

Irma is a large hurricane and will produce far-reaching effects regardless of where the exact center of the storm moves. Winds of strong tropical storm to Category 1 hurricane force, especially in gusts, are expected to produce considerable damage well east of Irma`s track, extending across east central Florida.

There remains a significant threat for flooding rains, and a Flood Watch continues for all of east central Florida. Heavy rain, especially in squalls, will increase in coverage and frequency across east central Florida tonight, and especially on Sunday through early Monday. Although Irma will be moving steadily northward, it will produce 8 to 12 inches of rain with locally higher amounts of 15 to 20 inches in areas which receive frequent or persistent squall bands.”

Read more about that issue here: 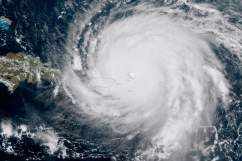 Is Orlando, Florida Evacuating Because of Hurricane Irma?