Missouri Governor Eric Greitens admitted to cheating on his wife in 2015, prior to being elected to office, after his mistress’ ex-husband spoke out to the media Wednesday night.

The ex-husband of Greitens’ mistress, who has not been identified, sent an audio recording to KMOV-TV of a conversation he had with her about Greitens. In the recording, the former mistress talks about the affair and also says that Greitens tried to blackmail her with a nude photo to keep her quiet, an allegation the governor denies.

Greitens, who is married to Sheena Chestnut Greitens, is a Republican who was elected in 2016. He billed himself during the campaign as a family man, by saying, “I’m Eric Greitens, I’m a Navy SEAL, native Missourian and most importantly, a proud husband and father.”

In the recording, the woman talks about how she met Greitens at the hair salon where she works and says they later began a sexual relationship. She said during one encounter at his house, he took a picture of her while nude.

“He said: ‘I’ll make you feel better. I’ll make you feel good. Come downstairs. I want to show you how to do a proper pull-up.’ And I knew he was being sexual and I still let him. And he used some sort of tape, I don’t what it was, and taped my hands to these rings and then put a blindfold on me,” she said on the recording, according to KMOV. “I didn’t even know. I feel like I don’t even know. I was just numb. I just stood there and didn’t (expletive) know. He stepped back, I saw a flash through the blindfold and he said: “you’re never going to mention my name, otherwise there will be pictures of me everywhere.”

According to Talking Points Memo, Greitens also slapped his ex-lover, according to her ex-husband and a Democratic operative, Roy Temple.

“Greitens invited her to the Greitens family home and into a guest bedroom,” Temple wrote in an email to TPM, describing what he had been told by the husband. “Before engaging in sex, Greitens asked if she had had sex with anyone since their last encounter. According to the account he gave me, she replied that she had had sex with her husband, at which time Greitens slapped her.”

Greitens’ attorney denied that accusation, telling TPM, “This allegation is completely false. It never happened. There was never any violence. Anything reported otherwise is untrue and we will explore pursuing all legal action. This was a consensual relationship that lasted multiple months and was years ago before Eric was elected Governor.”

The ex-husband, who has been divorced from his wife since March 2016, has been tweeting at Greitens and his wife since 2015 about the affair, including on election day. Heavy is not revealing the Twitter name of the ex-husband, though it does not appear to reveal his full name, because his ex-wife has not spoken publicly about what happened.

In the election day tweet, the ex-husband wrote, “Missouri you may elect a home wrecking, pandering, fake piece of shit to be governor. @EricGreitens @SheenaGreitens Eric is a pile of shit.”

The ex-husband once responded to a Greitens tweet in January 2016, during his campaign, in which he said, “Too many of our politicians have their priorities backwards.” The ex-husband wrote, “You’re right! Too many cheat on their wives with their hairdressers too right Eric? #Cheater This is a bad man 4 #MO.”

In his first tweet, the ex-husband replied to a photo and tweet posted by Greitens about being back home with his family for Thanksgiving. “Just make sure it’s with your wife this time and not other people’s,” the mistress’ ex-husband tweeted back.

You can see all of the tweets below:

The ex-husband told KMOV he spoke out because he has been contacted by law enforcement authorities and members of the media and believed it would come out at some point.

His attorney, Al Watkins, told KMOV he was also contacted by law enforcement. “My knowledge and my experience leads me to believe that at least, there is an elevated degree of interest in what is going on.”

In a statement issued Wednesday night, Greitens admitted to the affair.

“A few years ago, before Eric was elected governor, there was a time when he was unfaithful in our marriage. This was a deeply personal mistake. Eric took responsibility, and we dealt with this together, honestly and privately,” Greitens said in a joint statement with his wife, Sheena Greitens. “While we never would have wished for this pain in our marriage or the pain that this has caused others, with God’s mercy, Sheena has forgiven and we have emerged stronger. We understand that there will be some people who cannot forgive but for those who can find it in your heart, Eric asks for your forgiveness and we are grateful for your love, your compassion, and your prayers.”

Sheena Greitens added in a statement, “We have a loving marriage and an awesome family. Anything beyond that is between us and God. I want the media and those who wish to peddle gossip to stay away from me and my children.”

But Greitens’ attorney is denying any blackmail attempt by the governor.

“The governor has now seen the TV report that ran tonight. The station declined ti provide the tape or transcript in advance of running their story, which contained multiple false allegations,” attorney James Bennett said in a statement. “The claim that this nearly three-year old story has generated or should generate law enforcement interest is completely false. There was no blackmail and that claim is false. This personal matter has been addressed by the Governor and Mrs. Greitens privately years ago when it happened. The outrageous claims of improper conduct regarding these almost three-year-ago events are false.”

But later Thursday, a state prosecutor opened an investigation into the blackmail accusations.

“The serious allegations against Missouri Governor Eric Greitens are very troubling,” St. Louis Circuit Attorney Kim Gardner said in a statement “It is essential for residents of the City of St. Louis and our state to have confidence in their leaders. They must know that the Office of the Circuit Attorney will hold public officials accountable in the same manner as any other resident of our city. Both parties and the people of St. Louis deserve a thorough investigation of these allegations.”

Gardner asked anyone with information to contact her office.

According to Talking Points Memo, the FBI is also investigating.

“I have been receiving ongoing consistent contact from a special agent with the Federal Bureau of Investigations,” Watkins, the ex-husband’s attorney, told TPM. Watkins said he was first contacted by the FBI in October 2016.

When asked by TPM if he believed more damning revelations about Greitens would come out, he said that was a “correct statement.”

Watkins said about Greitens’ apology, “It is always important when you’re bellying up to the bar, that you belly all the way up to the bar.”

Greitens’ mistress has not commented publicly. Her attorney told KMOV-TV “no comment.” 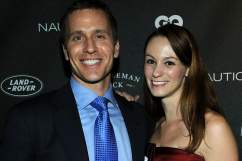 Loading more stories
wpDiscuz
0
0
Would love your thoughts, please comment.x
()
x
| Reply
Missouri Governor Eric Greitens has admitted to having an affair after his former mistress' ex-husband spoke to the media. The ex-husband has been tweeting about it for years.