A Sacramento father was found dead alongside his two daughters in what police are calling a gruesome murder-suicide. The body of 46-year-old Tunisian immigrant Hamdy Rouin was found in a vehicle along with his daughters Sara and Sophia, nine and twelve, respectively. The deaths are believed to have occurred on December 31, New Year’s Eve.

According to The Sacramento Bee, Rouin was facing charges for violating a protective order. Rouin was involved in a contentious legal battle over the custody of his daughters with his ex-wife, Amy Hunter. A review of the court filings indicates a troubled, violent and volatile history between Rouin and Hunter. A close-knit community in West Sacramento remains heartbroken and at a loss to understand the violence that occurred on December 31.

1. Sara & Sophia Were Still Alive When They Were Discovered by Local Residents in Their Father’s Car

Sara and Sophia were still clinging to life when local residents found them in Rouin’s vehicle. It is unclear whether Amy Hunter, the girls’ mother, was present when the girls were found. It is rumored (but not confirmed) that Hunter was in fact the first person to discover the girls, barely alive in the backseat of their father’s car.

The girls were rushed to the UC Davis Medical Center where they were later pronounced dead. Rouin’s vehicle was parked near the entrance to the Casa Mobile Park on West Capitol Avenue in West Sacramento, where the girls reportedly lived with their mother. According to The Daily Mail, several witnesses said that an attempt had been made to set the vehicle on fire.

Rouin was already dead when his daughters were discovered, according to police. Sara and Sophia were scheduled to be picked up by Hunter that evening at the location where they were found. Hunter is understandably distraught, according to her boss, Julie Jenkins, who was interviewed by The Sacramento Bee. Hunter works at the Caring Children’s Connection Center as a teacher. Hunter established a GoFundMe campaign with a goal of $25,000 to cover the cost of her daughters’ funeral expenses as well as damages sustained during an apparent recent burglary.

2. Police Have Not Released the Cause of Death

Autopsy reports have not yet been released. A police spokesperson stated that there were no visible gunshot or knife wounds on either of the girls, but declined to elaborate further. Police have, however, confirmed that Sara and Sophia were the victims of homicide at their father’s hands.

Court filings reflect a history of domestic violence. Hunter reported being threatened multiple times by Rouin over the course of and following their marriage. Hunter further alleged being physically abused by Rouin. These allegations were denied and challenged by Rouin’s attorney. It is unknown if Rouin has a history of physically abusing his children.

It has, however, been alleged that Rouin was physically abusive toward Hunter throughout their marriage. The police are believed to have been called to Rouin and Hunter’s former residence on more than one occasion due to domestic disturbances.

3. Rouin Immigrated to the United States From Tunisia

Rouin also went by the name Mohamed Rouhine. It is unknown when Rouin emigrated to the U.S. or when he married Hunter. Hunter converted to Islam prior to marrying Rouin. Sara and Sophia were active members of the local Muslim community, before and after the divorce. Davis Enterprise reports that the two girls attended the Salam Academy in Sacramento, a private school for Muslim students.

A candlelit vigil was held for Sara and Sophia shortly after the tragedy. Hunter was among those in attendance. Sara and Sophia were both interested in pursuing careers in the sciences. Sophia loved math and wanted to work for NASA. Sara was described as introspective, with a twinkle in her eye. A Facebook memorial page has been established for the girls, where they have been described by those who knew them as sweet, giving, insightful and compassionate.

M.A. Azeez, the senior imam of the Roseville Tarbiya Institute told The Sacramento Bee that he counseled Rouin in the past. Rouin had trouble adjusting to life in the U.S. and was often frustrated, Azeez explained. Rouin told Azeez that he felt he was treated unfairly by the divorce court, and that people sided with his ex-wife because she is white. He stated that he was at a constant disadvantage to Hunter because he was the immigrant. He also struggled to find and maintain steady employment.

Azeez addressed the crowd at the vigil held for the girls, offering words of comfort to the bereaved community. “Sometimes we don’t understand the decisions that God makes. We don’t understand the wisdom behind so many things that happen in this world and as men and women of faith, we have to come to grips with it and except it,” Azeez said, according to KCRA-TV.

4. Rouin Was Due to Appear in Court For Violating a Protective Order

Hunter filed a total of four protective orders against Rouin. He was arrested for violating the most recent order, a misdemeanor, and was scheduled to be arraigned the first week of January.

“Documents in the parents’ divorce file in Yolo Superior Court describe a troubled marriage in which Hunter said she suffered from physical, mental and emotional abuse, financially supporting her alcohol-abusing husband while he drifted from one job to another,” reports Lauren Keene of Davis Enterprise.

The Sacramento Bee also elaborated on the court filings. “In court filings, Hunter described Rouin as an abusive husband and heavy drinker who had hit her, threatened to throw the cat out the car window and told her he would take the girls away to Tunisia.”

According to KCRA, Rouin had allegedly been harassing Hunter. “The girls’ mother, Amy Hunter, said Rouin would send her text messages while drunk, violating the restraining order. One complaint lists 546 instances since May 2016.”

5. Rouin Lost Custody of His Daughters When His Divorce Was Finalized

“Rouin was rarely seen at Tarbiya or the Salam mosques that his family attended, said Azeez and Metwalli Amer, founder and president of Salam. Azeez said he tried to mediate the couple’s protracted custody battle,” reports The Sacramento Bee.

Julie Jenkins, a coworker of Hunter’s, explained that Hunter was “careful not to rock the boat” around Rouin, according to Davis Enterprise. Hunter described the tension that existed between her and her ex-husband, and that the girls were often caught in the middle. Jenkins also acknowledged that there was a history of domestic violence in the family.

“Beth Hassett, head of Sacramento’s WEAVE organization, which helps victims of domestic violence escape, called the apparent double homicide ‘the worst-case scenario’ for a mother trying to escape an abusive relationship. We see perpetrators of domestic violence trying to continue to control the victim even after the divorce is final,’ Hassett said. ‘The ultimate move is to kill themselves or the children.’ Often, she said, a court date can be a triggering event,” The Sacramento Bee reports. 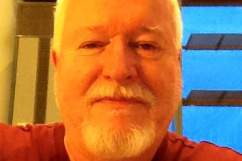