According to the Denver Post, the shooting also left two other sheriff’s office deputies wounded along with a Colorado Springs Police Department officer and a civilian. The suspect, whose name hasn’t been released, was killed.

Flick Was Shot While He & Other Officers Confronted a Suspected Car Thief, Who Was Also Killed During the Shootout

#BREAKING More than 30 cops outside an apartment complex near Galley and Murray. Stay with @FOX21News for the latest. pic.twitter.com/xFa8JRYDXp

Deputy Micah Flick was part of a team of officers from the El Paso County Sheriff’s Office, the Colorado State Patrol and the Colorado Springs Police Department who confronted a suspected car thief Monday about 4 p.m. in the 4200 block of Galley Road in Colorado Springs the Denver Post reports.

The officers were investigating a motor vehicle theft.

Springs Police Chief Pete Carey said there was a brief struggle and then the suspect, an adult male, fired at the officers. He was shot and killed. Four officers, including Flick, and a civilian were wounded during the exchange of gunfire. Carey said the wounded Colorado Springs office was in surgery Monday night, but was in stable condition. The conditions of the two injured deputies and the civilian were not immediately released. They were all taken to Memorial Hospital.

Officers have turned this into a giant crime scene. @LEmarie and I are to get you answers at Galley and Murray. @csgazette pic.twitter.com/pzHHmd0IP5

A witness told KOAA-TV that he saw multiple people on the ground and one person being given CPR. He heard someone yelling, “drop the pistol.”

Another witness told the Colorado Springs Gazette he heard 8 to 9 shots. The witness said he heard a few, before there was a break and then heard several more shots and then a final two shots.

Maryflo Horan, 21, lives in the Murray Hill Apartments. She heard gunshots, then saw a man she believes was a suspect. After she told police what she saw, they locked down her building, and dozens of officers swept it. (Her roommate is OK, by the way.) pic.twitter.com/2TrnbV0Ej8

Jason Adams, who lives in the Emory Apartments near the scene of the shooting, told the Gazette he heard the gunshots and walked to the Murray Hill Apartment parking lot, where the shooting occurred. Adams recorded video of the scene, which the newspaper says shows three people on the ground receiving CPR or other life-saving measures. All three were in civilian clothes, the newspaper says.

Adams said two Colorado Springs officers were working on one of the victims. Another person about 8 feet away had two bullet holes in the side of his torso, Adams told the newspaper.

Jill Gaebler, the Colorado Springs City Council President Pro Tem, who represents the area where the shooting occurred, call it a “tragedy,” but said she was not “surprised,” adding, “People seem to be less and less concerned about the lives of our public safety officers. It’s in all of our neighborhoods and it’s enough.”

Carey said they are not looking for any other suspects. “There is no continuing threat to the community,” he said at a press conference Monday night.

Deputy Flick was killed on his 11th anniversary with the El Paso Sheriff’s Office. “Today was his 11 year anniversary with EPSO, and our hearts are broken,” the sheriff’s office wrote on Facebook.

“It is with profound sadness that I say that this afternoon, Deputy Micah Flick, 34 years old, was shot in the line of duty and has died,” Sheriff Bill Elder said at a press briefing, tearing up. “Deputy Flick was an outstanding member of my agency and he will be missed.”

Flick was assigned as a detective in the sheriff’s office’s investigations division. He had previously served in the jail, in court and transport, with their special response team and on patrol. He was hired February 5, 2007.

He was interviewed by a local news station, KRDO, in 2016, while he was investigating several thefts of credit cards from vehicles. Flick was trying to warn residents about the thefts and encourage them to take preventive measures.

Flick Is Survived by His Wife & Their 7-Year-Old Twins

Deputy Micah Flick, seen here being interviewed back in 2016 by Colorado Springs TV station KRDO-TV, was shot and killed in the line of duty today. RIP pic.twitter.com/ZLTgJWEB9Y

Deputy Micah Flick is survived by his wife, Rachael, and their 7-year-old twins, Sheriff Bill Elder said at a press conference Monday night.

“Please uphold this family in your prayers as well as the other officers wounded in this incident,” CSCS wrote.

A procession is carrying slain Deputy Micah Flick’s body to the El Paso County Coroner’s Office. The streets are lined with people paying their respects, many of them carrying flags. pic.twitter.com/Huf9S1Vft0

People lined the streets near Memorial Hospital to pay their respects as Deptuty Micah Flick’s body was taken to the El Paso County Coroner’s office in a police procession. You can watch videos of the procession above and below:

In a statement, Colorado Governor John Hickenlooper said, “A senseless act of violence has claimed the life of another member of Colorado’s law enforcement family. Late this afternoon, we learned that El Paso County Sheriff’s Office Deputy Micah Flick was killed, two other deputies were injured, as was a Colorado Springs police officer and two bystanders. With the recent loss of now three deputies and many others injured, there’s no denying the grave impact this sequence of shootings is having on our state.”

He added, “We will once more come together to provide sympathy and strength for the deputy’s loved ones and pray for the recovery of those injured; however, we also must come together and say enough is enough. We want each officer, every deputy, to know we are grateful for their service.”

Hickenlooper has ordered flags to be lowered to half-staff statewide in Flick’s honor.

A Local Sheriff Called It ‘Unbelievable’ That 3 Deputies Have Been Killed in 37 Days, While a Deputy Wounded on December 31 Tweeted ‘Enough’

Flick is the third deputy in Colorado to be fatally shot in the line of duty in the past 37 days. Including the three officers wounded Monday, there have been nine officers injured in Colorado shootings during that same period.
Douglas County Deputy Zackari Parrish, 29, was killed on December 31, 2017, during a shootout at an apartment complex in Highlands Ranch, Colorado. The 37-year-old suspect fired more than 100 rounds before he was killed. He wounded four other deputies.

GoFundMeZackari Parrish with his wife and one of their daughters in a photo posted on GoFundMe.

On January 24, Adams County Deputy Heath Gumm was shot and killed while chasing a suspect at an apartment complex in Thornton. At his funeral, his widow, Natasha, read from a letter saying, “Can we please end these awful, pointless tragedies,” according to the Denver Post.

The suspect in that shooting was arrested and charged with murder and burglary.

Larimer County Sheriff Justin Smith told the Denver Post, “The feeling of the sheriffs is the same as the public. It’s absolutely unbelievable. I’ve never been to back-to-back funerals like that. The initial thought was it’s unbelievable to have two in a 30-day period. To hear there’s been a third is sickening.”

The Colorado State Patrol’s Sterling troop tweeted, “Again we put our shrouds over our badges in honor of murdered EPSO Deputy Flick. Is this going to be a permanent part of our uniform or can we expect better times?”

The Arapahoe County Sheriff tweeted, “We are grieving the loss of @EPCSheriff Deputy Micah Flick. Again saying words of condolence, crying tears of sorrow, screaming in frustration at another life taken too soon. 5 weeks, 3 deputies, 3 black bands, 3 broken families, 1 thin blue line that will only get stronger.” 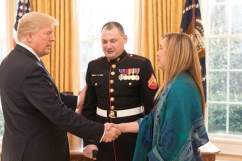