On February 26, California announced that auto manufacturers and technology companies will be able to put their driverless vehicles on state roads with no one in the car. Business Insider reported that the Department of Motor Vehicles expects to receive legal approval this week and will begin issuing permits within a month.

So far, 50 companies have registered with the State of California to do testing, and companies like General Motors and Waymo have already begun testing autonomous vehicles with someone sitting in the driver’s seat to take control if needed.

Waymo has primarily been testing its cars in Mountain View, where Alphabet Inc, its parent company, is based. Here’s everything you need to know:

Waymo is a subsidiary of Alphabet Inc., Google’s parent company. It is a “a self-driving tech company with a mission to make it safe and easy for people and things to move around,” according to Alphabet.

Sebastian Thrun, the co-inventor of Google Street View and the former director of the Stanford Artificial Intelligence Laboratory, led the development project of Waymo. His team created Stanley, a robotic vehicle that won a $2 million prize from the United States Department of Defense. The team was made up of 15 Google engineers.

The technology, which has been tested on a number of cars including the Toyota Prius, Fiat Chrysler, Audi TT, and Lexus RX450h, as well as a custom Google car, uses a high-definition precision map of the area the vehicle is using, which includes data on traffic lights and other information.

The Google vehicle uses equipment from Continental, Bosch, and ZF Lenksysteme. In 2017, the company announced a partnership with Intel, which would create more driving technology and develop more accurate processing.

Google cars have a Veoldyne 64-beam laser, which enables the car to create a 3D map of its surroundings. That map is then combined with high-resolution world maps to create data that allows the car to drive itself. Currently, they drive at a speed limit that is stored in the map data uses sensors to stay away from other vehicles.

2. There Have Been 14 Collisions With Waymo Cars, but the Company Says the Accidents Aren’t Their Fault

This winter our self-driving cars are coming to @PureMichigan to expand cold weather testing https://t.co/CJJ8jiOsLq pic.twitter.com/WSESJVgEgj

In 2017, Waymo cars covered 636, 868 miles while in autonomous mode, according to the California DMV. The vehicles have driven around Mountain View, and also through city traffic in San Francisco, and on Lombard Street, which is known for steep, sharp turns.

As of July 2015, there had been 14 minor collisions among Google’s 23 self-driving cars. At least eight of these were results of the cars being rear-ended, and two involved the car being side-swiped.

On February 14, 2016, a Google car failed to avoid sandbags blocking its way, and ended up hitting the side of the bus. “In this case, we clearly bear some responsibility, because if our car hadn’t moved there wouldn’t have been a collision,” Google said in a statement. However, the company maintains that in every other accident case, the vehicle was not at fault because the driver of another vehicle was to blame, or because the cars were still being manually driven. The company also created a safety report detailing how driverless cars can get in fewer accidents than those with drivers.

3. Advocates Say the Technology Could be Life-Changing for Those With Disabilities

The blind man that convinced #Google to launch a self driving car firm, #Waymo https://t.co/Qnkp7o5a90 via @MailOnline

On November 7, 2017, Waymo announced that it had begun testing driverless cars without a safety driver at the driver position. According to MIT’s Technology Review, advocates for the blind community hope self-driving technology is implemented soon for the public.

“Autonomous vehicles will be transformative for people who are blind,” said Dave Power, the president and CEO of Perkins, the oldest school for the blind in the United States. “For the first time, they will be able to get to school, work, and community activities independently, regardless of distance. There is tremendous enthusiasm about it, both here and nationally, among the blind.”

Rather than creating cars specifically for the visually impaired, advocates hope technology companies make cars that are disability friendly. That would enable people with visual, physical, and other impairments to be able to travel without assistance. 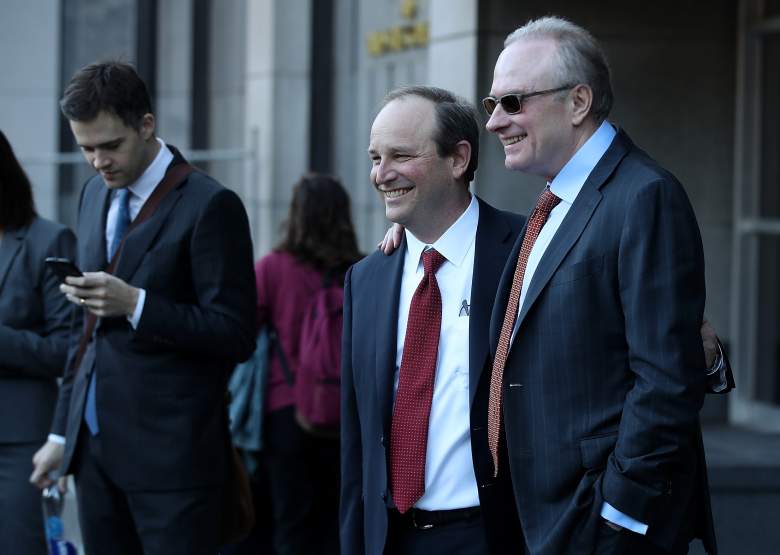 GettyUber attorney Bill Carmody (R) and Waymo attorney Charles Verhoeven (L) pose for a photo outside of the Phillip Burton Federal Building after the Waymo-Uber technology theft trial was dismissed./Getty

The lawsuit was mainly over Google’s LIDAR technology, the surveying system it uses to measure distance using laser light. Per Google car, the LIDAR system costs about $70,000. The technology has some issues, like not being able to spot potholes or be able to tell when humans like crossing guards or police are signaling for vehicles to stop. Google expects those issues to be fixed by 2020.

5. Waymo Cars Could Be Available to the Public As Soon As 2020

Our millions of miles of experience and extensive testing prepared us for our biggest milestone: putting fully self-driving cars on public roads with no one in the driver's seat. Learn more >> https://t.co/eHj8Ce0z0f pic.twitter.com/RwAfypwt3t

Sergey Brin, Google’s founder, said in 2012 he hoped to have self-driving cars available for the public in 2017, though that schedule was updated in 2014 to 2020, and could be even sooner. So far, Google has talked with General Motors, Daimler, Toyota, Ford, and Volkswagen about implementing its technology.

Waymo CEO John Krafcik said in a Medium post that Waymo could see the technology being useful “in personal vehicles, ridesharing, logistics, or solving last mile problems for public transport.” He also said, “our next step as Waymo will be to let people use our vehicles to do everyday things like run errands, commute to work, or get safely home after a night on the town”

Nevada, California, Michigan, Florida, and Washington, D.C. all currently allow driverless cars with a driver in them. California allowing the vehicles without a driver would be a significant step toward the cars being available to the public.