A Russian journalist and Kremlin critic rose from the dead Wednesday at a shocking press conference in Kiev, Ukraine. Arkady Babchenko was believed to have been shot dead Tuesday in an assassination in his apartment. But Ukrainian authorities announced his death was staged as part of an operation to catch his would-be killer, who they say was ordered by Russian agents to kill Babchenko because of his journalism.

Babchenko, 41, came out to applause and gasps at Wednesday’s press conference, where his wife joined Ukrainian officials to brief reporters on what was believed to be a murder case. News of his death was reported around the world and officials from Ukraine and Russia blamed each other for his death, while journalism advocates called his apparent killing an attack on the free press. Babchenko, a former soldier turned war correspondent, has been outspoken in his criticism of Vladimir Putin and the Russian government, especially their activities in Ukraine and Syria. He fled from his homeland in February 2017 after saying he had been receiving death threats and no longer felt safe there.

On Wednesday, Babchenko thanked everyone who had been mourning him. You can watch the press conference below. The stunning moment where Arkady Babchenko walks into the room happens about the 9-minute mark:

One day before the press conference, Ukrainian police told the media that Babchenko had been shot three times in the back in his Kiev apartment. Government officials told reporters Babchenko had been at the store buying bread and was killed upon his return home. His wife said she was in the bathroom when the shooting happened and came out to find him bleeding. Authorities said Babchenko had been rushed to the hospital, but died before arriving there. A photo of his body, which is now known to be staged, circulated on social media, showing him face down in a pool of blood with apparent gunshot wounds on his back. Social media users claimed the photo had been taken by Babchenko’s wife.

Ukrainian authorities said at a press conference announcing Babchenko’s supposed death that they believed his work as a journalist had made him a target. A day later, security officials said they received advance warning of a planned assassination attempt and decided to set up a sting. The Ukrainian security service said they wanted to gather evidence of terrorist activity by Russian special services in Ukraine, according to CNN. The plan was in place for more than a month, The Guardian reports.

Babchenko apologized to those who thought he had been killed. “I have been forced to bury my friends and colleagues many times and I know the sickening feeling,” he said at the press conference. He said his wife and close family members were not in on the plan.

“Special apologies to my wife, Olechka, there was no other option,” Babchenko said at the press conference. “The operation was under preparation for two months. I’ve done my work. I’m still alive for the moment.”

Ukrainian officials said Russian authorities recruited a former fighter in east Ukraine to kill Babchenko by offering $30,000. Further details of the investigation and how Babchenko faking his death helped catch the would-be killer have not been made public.

After news reports about his death, police confirmed he had been shot and said it was believed he was targeted, likely because of his work as a journalist. Ukrainian lawmaker Anton Gerashchneko told the BBC the killer waited for Babchenko near his apartment and then assassinated him from behind. “When Arkady opened the door of his flat, the killer cowardly shot him in the back, firing several shots,” the politician wrote on Facebook. It is not clear if Gerashchneko was aware the death was faked.

A neighbor told local media that the killer likely used a silencer, since they heard no shots, but it now appears that was because Babchenko was never killed.

Arkady Babchenko was born March 18, 1977, in Moscow. While studying law as an 18-year-old, he was conscripted into the Russian army and served during the Chechen wars from 1994 to 2000. After leaving the military, he became a war correspondent, working for Moskovsky Komsomolets and Zabytyi Polk. He chronicled his experiences in the military in a memoir, “One Soldier’s War,” published in 2006. He graduated from the Modern Humanitarian University with a degree in international law.

Babchenko stopped working as a journalist for several years, becoming a taxi driver, but returned to war reporting in 2009 for the newspaper Novaya Gazeta, covering the South Ossetia war. Babchenko was also the founder of “Journalists Without Middlemen,” and continued writing books about his military experiences, winning several literary awards. Babchenko was additionally a freelance writer for several foreign outlets, including the BBC and The Guardian about conflicts in Ukraine and Syria, as well as Russian and Eastern European politics.

Arkady Babchenko, Propaganda is Putin's Most Powerful WeaponArkady Babchenko shares his first-hand account of the Second Chechen War and subsequent wars that have underscored Putin's time in office. He cites Putin's propaganda as the key mechanism that has enabled the Putin regime to dehumanize groups of people and commit gross violations of human rights within Russia and abroad.2018-05-29T20:03:38Z

Babchenko left Russia in February 2017, saying at the time his native land was “a country I no longer feel safe in.” He and his family first moved to the Czech Republic and then on to Israel before settling down in Kiev, where he worked for the Crimean broadcaster ATR. In his most recent writing, Babchenko was critical of the Kremlin, especially the annexation of Crimea and its support of separatist insurgents in eastern Ukraine, along with the Russian campaign in Syria.

He said he fled Russia after receiving threats about a December 2016 Facebook post in which he said he felt no regret over the deaths of a military choir and other passengers on a Russian plane that crashed while en route to Syria. In the post, he called Russia an “aggressor.” Babchenko had previously been critical of Russia’s role in the Syria conflict. He said after that post, he received threats, his home address was published and some called for him to be stripped of his Russian citizenship.

“I didn’t call for anything or insult anyone. I just reminded my readers that Russia was indiscriminately bombing Aleppo, without recognising that dozens of children were dying in those bombs, their photographs making their way around the world. I also called Russia an aggressor,” Babchenko wrote in The Guardian about the reaction to his “unpatriotic post.” He added, “After all these wars and deaths, I felt only one thing when I heard that the representatives of Russia’s military had died: indifference. But for some, expressing this on Facebook was not patriotic enough. And so it began.”

He was listed as number 10 on a list of “Top 100 Russophobes,” by Tsargrad, “pro-government ultranationalist” TV network, he wrote in The Guardian, and he received several threats to his life. “My home address has also been published on the internet, together with an invitation ‘to visit’ I have received threats to me and my family by the thousand – in my email inbox, on Facebook and by phone,” he wrote.

Babchenko wrote on Facebook in 2017, “There is an informed opinion that it would be a good idea for me to live outside our god-protected Motherland for a while.”

You can read more about Arkady Babchenko at the link below: 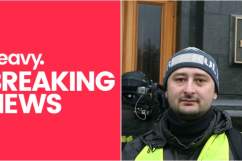 Arkady Babchenko Is Alive: 5 Fast Facts You Need to Know

Read More
Breaking News, Russia, Ukraine
Arkady Babchenko, a Russian journalist believed to have been shot dead in Kiev, emerged alive at a press conference as Ukrainian officials revealed it was a sting operation.