Dillion Burch was arrested in Orlando, Florida, on Monday, May 28, after police say he told Walt Disney World Resort guests that there was an active shooter on the property.

According to the Orange County Sheriff’s Office, the 22-year-old Arizona man was trying to record the reactions of guests at Disney’s Contemporary Resort after he warned them that they were in danger. Walt Disney World personnel placed the resort in lockdown and police were called to the scene.

A short while later, Burch was taken into custody.

1. He Was Sentenced to 3 Days in Jail After Being Cited for Disturbing the Peace & Disorderly Intoxication & Pleading ‘No Contest’

Burch was taken into custody on two offenses; disturbing the peace at a public lodging and disorderly intoxication, according to public records. Both charges are considered second-degree misdemeanors, under Florida law. He was “highly intoxicated” and the incident caused a “significant disturbance,” according to the affidavit.

Burch appeared in court on Tuesday, May 29, where he pleaded no contest. Burch was sentenced to three days in jail, but posted bond and has since been released, according to the Orlando Sentinel.

Florida Statute 775 governs the punishment of criminals under Chapters 82 and 83. Each of the counts Burch was facing carried a maximum fine of $500 and jail time not to exceed 60 days, meaning he could have spent up to 4 months behind bars for his crimes.

2. He Told the Hotel’s Manager That He Was Doing a ‘School Project’

Burch approached guests at Disney’s Contemporary Resort just after midnight and told them to evacuate the building because there was a gunman on the property. He was recording their reactions to post on his YouTube channel as some sort of experiment. Heavy was unable to locate Burch’s YouTube channel. A search of his name on the site only kicks back results of a user with the same name who posts workout videos.

After delivering the message, Burch told the hotel guests that he was joking, but it was too late. He had already frightened many people and created a panic.

According to Click Orlando, Burch told a woman at the hotel’s front desk that he’d be conducting this prank. The unnamed woman relayed the message to an on-duty manager, who approached Burch inside the hotel. Burch told the hotel’s manager that he was doing a project for school. The manager told Burch that police had been called.

“Burch told the manager he would leave on his own and asked him not to follow him, the report said. He then walked out of the hotel lobby, saw deputy’s lights and began running into the parking lot, authorities said. Security later found Burch hiding in a row of bushes on hotel property and called deputies to make contact with him, according to the report.”

It is unknown if Burch is in school or if he was indeed conducting some type of project.

3. He Has Been Banned From Walt Disney World Properties

There is always Magic in this Kingdom! ✨ #MagicKingdom #WaltDisneyWorld (?: @disneysenses)

Burch has been banned from Walt Disney World properties. He will not be allowed on the parks or at any of the hotels in the future.

There are numerous ways in which a person can get himself or herself banned from the Happiest Place on Earth. Some examples include running shirtless through Epcot, harassing or abusing a Disney cast member, and trespassing in forbidden areas.

It is believed that a person who is arrested on Disney property is also subject to being banned from Disney resorts.

The hotel of the future. #disneyscontemporaryresort

A post shared by Disney's Contemporary Resort (@disneyscontemporaryresort) on Feb 26, 2017 at 3:54pm PST

Disney’s Contemporary Resort is located between Bay Lake and the Seven Seas Lagoon. The hotel is best-known for it’s unique design, as the monorail goes through the building. The hotel is walking distance from Disney’s Magic Kingdom.

According to the website All Ears, the Contemporary is comprised of approximately 750 guest rooms. The tower portion of the hotel has about 500 rooms, while the garden portion has another 250 or so.

In addition to its guest accommodations, the resort also features some acclaimed restaurants and lounges that Disney World guests frequent. The well-known California Grill is located on the 15th floor of the tower and offers impressive views of the Magic Kingdom. It is a popular spot to visit at night, as the view of the park’s fireworks is quite impressive.

The Orlando nightclub shooter, whom police have identified as Omar Mateen, had plans to open fire on Disney property, according to prosecutors in the trial of Mateen’s widow, Noor Salman.

Disney Springs is visited by thousands of guests each and every day. The open-air shopping and entertainment complex was Mateen’s intended target, according to Assistant U.S. Attorney Sara Sweeney.

There have been rumors that Disney will install metal detectors at the entrances of the complex, but that has yet to happen. 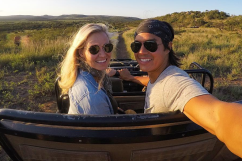 Read More
5 Fast Facts, Crime, Florida, Orlando, Walt Disney World
wpDiscuz
0
0
Would love your thoughts, please comment.x
()
x
| Reply
Dillion Burch was arrested on Walt Disney World property after pulling a prank and telling guests that there was an active shooter at the Contemporary resort. Here's what you need to know.