CBS Los Angeles Rodolfo Rodriguez is a 92 year old man who was beaten with a brick on the Fourth of July.

In south Los Angeles on the Fourth of July, a 91-year-old man was brutally beaten by four or five people for what appeared to be racist motivations. Rodolfo Rodriguez was walking in his neighborhood when he came into an altercation with Laquisha Jones, who then proceeded to beat him with a brick.

On Tuesday night, Laquisha Jones was arrested for assault with a deadly weapon, and her bail is set at $200,000. But there are still several other suspects at large. According to witnesses, three or four men soon joined the woman in kicking and beating Rodriguez, even going so far as to shout racist claims at him. Rodriguez is currently hospitalized for his injuries.

Though the Los Angeles Police Department have yet to clarify whether or not they believe this to be a motivated hate crime, Twitter users have used the incident as a means to cry out against similarly racist acts.

Rodriguez is a father and grandfather, and will be turning 92 in September. Here’s what you need to know.

1.  Rodriguez  Was Going on His Afternoon Walk When He Accidentally Bumped Into a Woman & Child

Rodriguez was allegedly going on his normal afternoon walk when he bumped into Jones and her child. Then, because she claimed he was trying to “take” her child, Jones began to beat Rodriguez with a brick.

Soon after, three or four men joined her and began to kick and hit Rodriguez. Eventually he was allegedly struck from behind, hit the ground and blacked out, according to the Los Angeles Police Department.

Rodriguez was eventually assisted by a witness who called 911, and the suspects ran away.

2. He Was Rendered Immobile After the Attack, & Now Suffers Multiple Injuries

The attack was so brutal that Rodriguez was unable to walk after the suspects ran away, and he now suffers a myriad of injuries, including bruised ribs, a broken cheekbone, and head and neck injuries.

Rodriguez does not speak English, and has not commented on the incident, though family members such as his grandson Erik Mendoza have been outspoken about the brutal nature of the incident.

Of the injuries and the gruesome nature of the beating, Los Angeles Sheriff’s Deputy D’Angelo Robinson said: “We are concerned, especially with the type of crime they committed. There was what appears to be a 4-year-old child there who witnessed the entire thing. We can’t have these kind of people like that out in the streets”

3. A GoFundMe Has Been Established to Help Cover Rodriguez’s Medical Costs

There’s no reason that 92 year old man should’ve been beaten with a brick for accidentally bumping into a kid.

Erik Mendoza, the grandson of Rodriguez, set up a GoFundMe for Rodriguez following the attack. Though the initial goal for the GoFundMe was $15,000, the campaign has already surpassed $300,000 and is trending on the site.

Mendoza wrote for the page, “On July 4th at around 7pm, my grandfather Rodolfo Rodriguez  whose 92 years of age was going for his daily walk around the block when he was assaulted by and African American lady and five other guys. He is doing really bad, has a lot of bruises on his face and a broken cheekbone.”

This man is an American citizen. These people should be ashamed of what they did. Nothing is going to happen to them though because how corrupt the Liberal paradise that is California . Im very sorry that this happened to you Rodolfo Rodriguez . I HOPE justice is served on them. https://t.co/pOEkLrJgqd

4. The Suspects Allegedly Told Rodriguez to ‘Go Back to Mexico’

According to one of the witnesses of the attack, Misbel Borjas, the suspects said several racist things to Rodriguez while beating him. Rodriguez was visiting his family from Mexico, a trip he makes twice a year, according to CNN. It was his second day in the US when Jones attacked him.

“She was yelling at him, ‘Go back to your country,’ or ‘Go back to Mexico,’” Borjas said, via The Los Angeles Times. “It was racist.”

Maybe our national media should be less concerned about whether or not Stephen Miller gets the double birds while buying sushi and more concerned about godawful stuff like this. https://t.co/XprMype2bS

Borjas added that Jones also tried to attack her when she tried to help Rodriguez, using “the same rock” that she had been using on Rodriguez.

Borjas apparently was able to take a picture of the woman as she walked away, and as she was doing so the men returned to beat Rodriguez further.

Mendoza later told news channel KTLA-TV that he couldn’t believe anyone would do that to an elderly man. “How can you hurt a 92-year-old man? What kind of threat does he pose to you, for you to do this to him?” He said. “That’s why we’re still in shock, as you can see he’s badly injured.”

5. The Suspects Are Still at Large, With No Major Leads

Though Jones has been arrested, there are still multiple male suspects at large.

This post will be updated as more information is released. 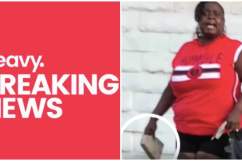 Read More
5 Fast Facts, Breaking News
Follow Heavy ↓
wpDiscuz
0
0
Would love your thoughts, please comment.x
()
x
| Reply
Rodolfo Rodriguez is a 92 year old man who was brutally attacked by a woman and four men in south Los Angeles on the fourth of July. He is currently hospitalized for his injuries, and the suspects are still at large.