Mollie Tibbetts is dead, her body found one month after she was reported missing, sources told Fox News on Tuesday, August 21. On the night of her disappearance, a True Value hardware store in the area was vandalized, and some reddit users believe that there is a connection between the two incidents. At this time, however, police have not confirmed any kind of connection, and the two incidents appear to be coincidences.

“A bartender in Brooklyn, Jamie Manatt, recalled how it was especially ‘quiet’ the night Tibbetts was last seen. She said the FBI later came to her home and questioned whether there were any ‘unusual’ people in the bar that night. Manatt said she left the bar at around midnight that night and noticed that the True Value hardware store nearby had been vandalized. She said she alerted a deputy who then canvassed the area for the vandal but ‘it was very quiet. Not many people were out,'” Fox News reported back on August 1.

For weeks, social media users have been trying to figure out what happened to Tibbetts, hoping and praying that she was found alive — and safe. After Fox News reported that her body had been located and she was deceased, a few people started retracing information that was given to the media — and the True Value vandalism was brought up.

“I don’t want to take away from Mollie, but there were some rumors that an arrest was made for the True Value vandalism. I wonder if it’s related,” wrote one reddit user.

“I mean he has to be. No way was that a coincidence,” speculated another.

Police in the area have not mentioned the True Value vandalism case in connection with Tibbett’s disappearance. The name of the suspect responsible for vandalizing the True Value was not released by police.

Police did obtain surveillance footage from Casey’s General Store. It seems that some people had been confusing Casey’s with True Value, according to WebSleuths.

“Are Casey’s General Store and True Value 2 different stores? Or is it Casey’s True Value? If 2 different stores, then True Value got vandalized that night and LE is looking at video surveillance from Casey’s right?” asked one WebSleuth user. The two stores are indeed different. It is unknown if police found any useful information on the video footage that they reviewed.

A press conference with an update on the case is scheduled for 5 p.m. central time. 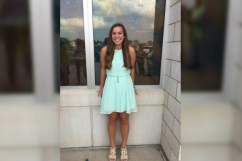 Mollie Tibbetts’ Eerie Pinned Tweet Is About a ‘Missing Child’