Hurricane Florence has been soaking the east coast, bringing record-breaking amounts of rainfall and displacing thousands of people. However, it isn’t just humans that are suffering from Florence; reports of abandoned animals and pets seeking shelter from the rising waters have been flooding social media, along with plenty of pictures and video of the volunteers taking time to rescue them.

Among the many admirable rescue stories is Tony Alsup, a trucker from Greenback, Tenn., who drove to South Carolina in a school bus to evacuate 53 dogs and 11 cats from animal shelters in the path of Hurricane Florence. Alsup drove through North Myrtle Beach, Dillon, Georgetown and Orangeburg to load up dozens of animals to transport to a shelter in Foley, Alabama, where they will up for adoption to loving families.

“It’s so easy for people to adopt the small pets and the cuties and the cuddly,” Alsup told Greenville News. “We take on the ones that deserve a chance even though they are big and a little ugly. But I love big dogs, and we find places for them.”

Alsup bought the bus for $3,200 with his own money about a year ago after offering to help transport displaced animals during Hurricane Harvey. He’s been driving to hurricane zones ever since.

Another video making its rounds on social media is a group of volunteers making their way through the flooded streets of Jacksonville, North Carolina, when they come across two dogs stranded on the porch of a flooded home.

The video shows the rescuers gently coaxing the dogs to them before lifting them up and walking the scared, shivering dogs to the boat. The volunteers knocked on the door of the home several times before finally making the decision to save the dogs. The rescuers are also seen rescuing two terrified kittens who were clinging to a building and trying to swim through the floodwaters.

The rescuers, now identified as Matthew Drake, a pastor at Richlands United Pentecostal Church, and two members of the church, are being hailed as heroes after the sweet rescue went viral.

The Coast Guard was also caught on camera during the dramatic rescue of 6 beagles that were close to drowning in a flooded pen in Columbus County, North Carolina. The video shows the 16-foot punt boat pull up to flooded home and two cages filled with beagles desperately trying to keep their heads above water and climbing up the fence, attempting to stay dry.

According to USA Today, the Coast Guard members were all relieved to have rescued the dogs in time. “If we would have gotten here just a few minutes later, I don’t know if these guys would have made it,” he said.

Josephine Horne, who owns the dogs and was receiving oxygen on the Coast Guard boat, told USA Today that she and her husband had originally evacuated, but returned when they thought the wind and rain had died down. Hornes said she was relieved to hear their dogs were safe, along with their neighbor’s four pit bulls.

“Thank god,” she said. “There are some things you can’t replace.”

WATER RESCUE: The @USCG rescues residents and their pets from flooded areas around North Carolina in the wake of Florence.

Three workers at an animal shelter in Carteret County Humane Society in North Carolina also found themselves trapped with 123 animals, according to News Observer. The flood waters forced the staffers to the second floor, where they faced the danger of a collapsed roof. The Cajun Navy, a group of Louisiana-based boat owners who volunteer for rescues, helped evacuate the shelter.

@CajunNavyRelief Today, I got to spend time with many of the dogs that you rescued from Carteret County in North Carolina. They all wanted to say thank you for giving them a second chance! ?❤️ pic.twitter.com/459ruN4Vi2

The animals have been rescued

Other videos of compassionate, heartwarming and daring rescues flooded Twitter, showing several aerial rescues of people and pets trapped during the rising floodwaters. Check out some of the pictures and videos below.

You should also check out this story about a group of amazing volunteers rescuing a cow who was drowning in North Carolina.

Photos: Pet Rescues in the Wake of Hurricane Florence – 24 images from North and South Carolina as owners, neighbors, and first responders work to find and care for animals left behind or caught in the storm. https://t.co/u2KRcQ5CWm pic.twitter.com/bdsTF0U3mr

Photos: Pet Rescues in the Wake of Hurricane Florence – 24 images from North and South Carolina as owners, neighbors, and first responders work to find and care for animals left behind or caught in the storm. https://t.co/u2KRcQ5CWm pic.twitter.com/mdCMpybopH

The line of folks waiting to pick up foster dogs for the weekend so coastal shelters can evacuate here before #HurricanceFlorence. Many more behind me. Sometimes humans are okay. ❤️ pic.twitter.com/niyCRDygOV 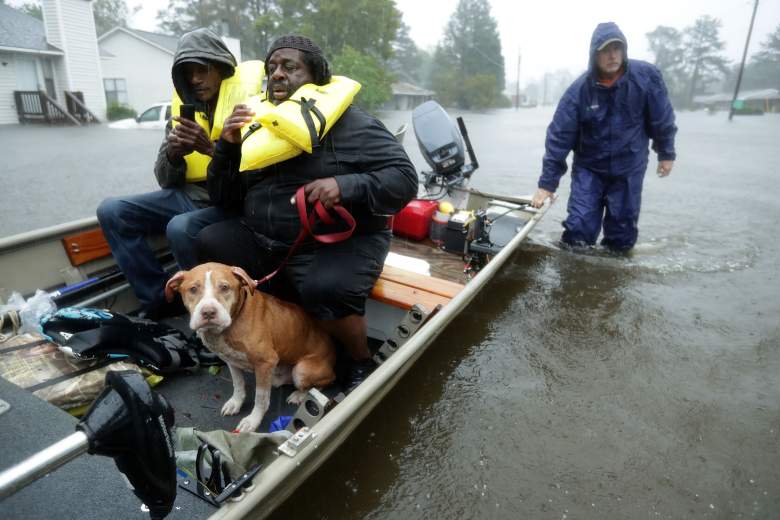 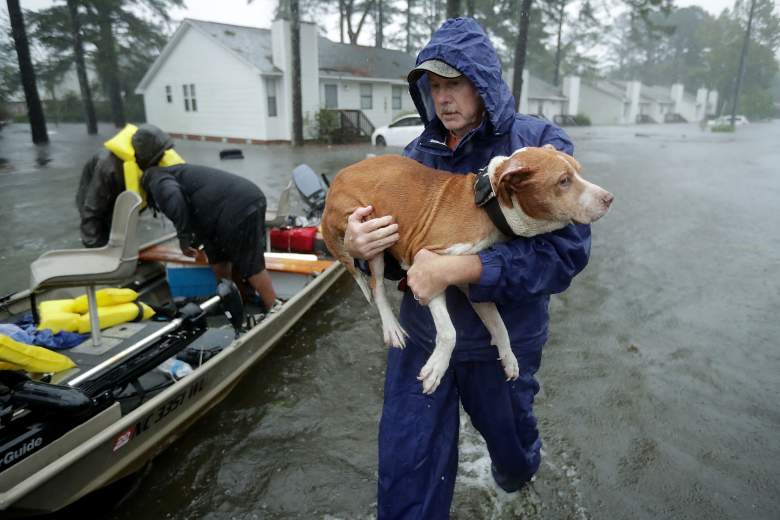 Has Heavy missed any incredible animal rescue stories? Let us know in the comments below! Heavy will continue to update as more stories emerge.