Jason Leopold is one of the BuzzFeed reporters who broke the story that President Donald Trump allegedly instructed Michael Cohen to lie to Congress about a proposed Trump Tower in Moscow.

Leopold and Anthony Cormier cited two unnamed federal law enforcement officials for the article, which was published late Thursday, January 17. According to these sources, the president pressured Cohen to say that the project fell apart months earlier than it really had.

The BuzzFeed piece described the significance of such a revelation: “Cohen’s testimony marks a significant new frontier: It is the first known example of Trump explicitly telling a subordinate to lie directly about his own dealings with Russia.”

The Trump administration has slammed and dismissed the allegations in the article. Meanwhile, congressional Democrats such as Rep. Joaquin Castro said that if true, the president should “resign or be impeached.” Late Friday, the Special Counsel’s office also weighed in to dispute the article (more than that below).

The fallout from the article has prompted criticism of journalist Jason Leopold, a senior investigative reporter for BuzzFeed. He was a finalist for a Pulitzer Prize in 2018 for an investigative piece on Vladimir Putin and Russia. But years prior to that, he faced several scandals. The scandals included accusations of plagiarism and a story about former deputy White House chief of staff Karl Rove that turned out to be inaccurate.

We have reached out to Leopold for a comment.

1. Leopold Told MSNBC That He Has Personally Seen Documents Pertaining to the Investigation & That He Is ‘Very Confident’ in the Accuracy of the Report; The Special Counsel’s Office Later Released a Statement Disputing the BuzzFeed Report

Jason Leopold gave an interview to MSNBC over the phone on Friday, January 18, as critics questioned the accuracy of the BuzzFeed report. He stressed that he had personally seen the documents that reportedly provide evidence that President Trump had told Michael Cohen to lie to Congress.

“I am rock solid. My sourcing on this goes beyond the two that are on the record. This 100% happened,” @a_cormier_ says about his BuzzFeed report that President Trump directed Michael Cohen to lie to Congress about proposed Moscow project. https://t.co/sF3XuqPfkq pic.twitter.com/BMCzhs904a

Earlier in the day, his colleague Anthony Cormier had told CNN that he had not personally viewed the corroborating evidence that the two law enforcement sources had cited. Cormier said the two sources are “fully, 100% read-in.” He also stated that he and Leopold’s article was based on months of reporting and that it was “rock solid.”

When asked about what Cormier had said, Leopold insisted that they had seen the documents and been briefed on the evidence by sources. He also echoed that they had been investigating the Trump Tower project over the course of a year and that they were very confident in their reporting.

Kevin Corke, @FoxNews “Don’t forget, Michael Cohen has already been convicted of perjury and fraud, and as recently as this week, the Wall Street Journal has suggested that he may have stolen tens of thousands of dollars….” Lying to reduce his jail time! Watch father-in-law!

Since the story broke, President Trump took to Twitter to accuse Michael Cohen of lying in order to reduce his jail sentence. Leopold responded to the president’s assertion by stating that Cohen has already been sentenced and that anything he says now is unlikely to reduce his sentence. Leopold also told MSNBC that the FBI and the Special Counsel’s office had obtained evidence from the raid on Cohen’s offices, such as emails and text messages between Cohen and Trump.

However, the Special Counsel’s office has since weighed in. Late Friday, Robert Mueller’s office released a rare statement. It read: “BuzzFeed’s description of specific statements to the Special Counsel’s office, and characterization of documents and testimony obtained by this office, regarding Michael Cohen’s congressional testimony are not accurate.”

Our response to CNN's — and all other reports — questioning the integrity of the reporters behind @BuzzFeedNews' latest bombshell investigation: pic.twitter.com/VR4y1Ze0Eo

Earlier in the day, the BuzzFeed team expressed full confidence in their reporters and the explosive article.

“Jason is one of the best journalists in the world and he has proven it, with reporting that’s been months ahead of developments in the Mueller investigation. His & Anthony’s work has been proven to be true at every turn, & it’s interesting that these personal attacks are surfacing only now, as the facts become more dangerous for the individuals involved. BuzzFeed News stands by this story 100%.”

Following the Special Counsel’s statement, BuzzFeed editor-in-chief Ben Smith wrote on Twitter that the organization stands by its reporting and urged Special Counsel Mueller to be more specific about what exactly he is disputing.

2. Leopold Reported in 2006 That Karl Rove Was About to be Indicted, But Charges Were Never Filed

Video: @DanaPerino and @KarlRove discuss the Buzzfeed ’scoop’ and share their experiences with one of the reporters involved: Jason Leopoldhttps://t.co/qJIxc1CGoW pic.twitter.com/IeghYLGLAK

Jason Leopold faced scrutiny in 2006 for reporting a story about Karl Rove, Deputy Chief of Staff to President George W. Bush, that turned out to be inaccurate. The story was that Rove was facing charges in connection to the case of Valerie Plame, a covert CIA agent whose identity had been leaked to the media.

Leopold told Medium that an FBI source called him and relayed that Rove had been indicted. Leopold then called a second source who allegedly confirmed that an indictment had in fact been filed. Leopold’s article was published on Truthout.org. However, the story turned out to be false. Rove was never indicted.

The Columbia Journalism Review reported on the fallout in 2006. The executive director of Truthout, Marc Ash, initially stood by the article and asserted that it was based on information from three sources. But later, he seemed to backtrack, writing that Leopold’s story was based “on single source information and general background information obtained from experts. The conclusions we arrive at should be considered carefully, but not taken as statements of fact, per se.”

Rove is no fan of Leopold. Rove appeared on Fox News on January 18, 2019, to weigh in on the Buzzfeed story about President Trump and Michael Cohen. Rove stated, “This is a sensational story. If true, problematic. But anything that has Jason Leopold’s name on it, particularly when it is anonymous sources, strikes me as something we out to wait and make a judgment about later.” You can watch that interview here.

3. ‘Salon’ Removed an Article Leopold Wrote in 2002 Due to Questions About its Accuracy & For Plagiarism

Still happy with this 2014 profile of @JasonLeopold. I wrote it before he went to BuzzFeed and broke some of the most important stories about Trump-Russia. https://t.co/r17VcY53WT

Jason Leopold used to write as a freelancer for the online magazine Salon. But in 2002, that relationship went sideways over a story Leopold wrote about Thomas E. White. White served as Secretary of the Navy under President George W. Bush. Prior to joining the Bush administration, White worked as Vice Chairman of Enron Energy Services.

Leopold claimed in the Salon piece that White had tried to hide losses at the company. Leopold reported that White had sent an email to a colleague that read, “Close a bigger deal. Hide the loss before the 1Q.” Salon admitted in a written apology that no editors had personally seen the email in question. Salon also stated that nearly 500 words of the article had been lifted from a piece in the Financial Times.

Leopold was quoted in a New York Times article about the scandal, written by David Carr in 2002. He told the newspaper, “There is an enormous amount of political pressure on Salon” and that he felt the site had essentially abandoned him.

Medium reported that Leopold owned up to the plagiarism. The site quoted him as saying, “It was completely f*cked up” and that “there’s nothing I can say that will explain it.”

4. Leopold Was Fired From the Los Angeles Times Following a Tense Confrontation With a Colleague

Jason Leopold worked for the Los Angeles Times between December 1998 and April 2000 as a general assignment reporter. He was fired after a dramatic confrontation with a colleague. Leopold was accused of threatening violence against a co-worker who reportedly asked Leopold to turn his music down.

Leopold discussed the incident in an interview with NPR in 2014. He explained that the woman who requested that he turn down his music was not physically in the newsroom; she told Leopold that she had received a message from another reporter who complained that the music was a distraction. Leopold told NPR what happened next:

“I stood up and I said, who the [bleep] just sent Daneen (ph) a note saying my music is too loud? And this little kid stands up and said, it was me. And I said, you [bleep]. I’ll rip your [bleep] head off. He says to me, let’s go outside. We never made it outside. I was the president of the Society of Professional Journalists, the local Los Angeles chapter. The next thing you know, I get a phone call from my editor. And he said, I got bad news for you. David, who raised the complaint, he went to human resources. I’ve got no choice, we have to fire you. I just lost it. I started crying. I was trying to rebuild my life and it all came crashing down.”

Jason Leopold has been open and honest about struggles he has faced in the past. He described suffering from a cocaine addiction in a memoir titled “Off the Record.” In the book, he also reportedly discussed a suicide attempt and a former conviction for grand larceny.

But the book was never published. According to a Washington Post article from 2005, the publisher decided to cancel the book after receiving a letter from an attorney representing a source referenced in the book. Leopold told the Post, “I’m devastated. I worked really hard these past two years to restore my credibility after the Salon fiasco… I have a checkered past, and I was hoping that by coming clean about my own past, it would allow me to move forward.”

Leopold did end up getting the story of his personal life out there. His book “News Junkie” was published in 2006. 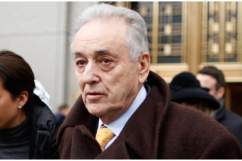 Loading more stories
wpDiscuz
0
0
Would love your thoughts, please comment.x
()
x
| Reply
Jason Leopold is a senior investigative reporter for Buzzfeed. His past includes accusations of inaccurate reporting and plagiarism.