Lilliana Schalck, 13, became ill and died unexpectedly before a cheerleading competition in Columbus, Ohio, on February 23, 2019.

The middle school student from Fort Thomas, Kentucky, told her father she was not feeling well. He took her to a hospital, where she passed away. School officials confirmed her death and the coroner revealed that she had died from a bacterial infection.

Schalck’s school in northern Kentucky held a vigil to honor her memory on February 24.

1. Lilliana Schalck Was in Columbus For a Cheerleading Competition; Her Father Took Her to the Hospital After She Began to Feel Unwell

A sad day for our community. pic.twitter.com/h2Vw0X0gOU

Lilliana Schalck was in Columbus, Ohio, on Saturday, February 23, for a cheerleading competition. It was the Midwest National Championship, put on by COA Cheer and Dance, at the Greater Columbus Convention Center.

She was getting ready to compete with her team from Premier Athletics of Northern Kentucky. But Lilliana told her father that she didn’t feel well. He took her to a nearby hospital to be checked out. Highlands High School Athletic Director Kevin Nieporte told the Cincinnati Enquirer that Lilliana’s health “quickly deteriorated.”

Fort Thomas Schools tweeted out a message the next day, sharing the tragic news that Lilliana had passed away. The Franklin County Coroner discovered that Lilliana died from an underlying strep infection, called Group A Beta-hemolytic Streptococcus.

2. Lilliana Schalck Was an Eighth Grader But Competed With High School Students

Lilliana Schalck was a student at Highlands Middle School. It is located in Fort Thomas, Kentucky, which is located on the Ohio River near Cincinnati.

She was an eighth-grade student but her talent earned her a spot on the high school team. The Enquirer wrote that Lilliana was often the one the squad lifted to the top of pyramids to perform stunts.

Fort Thomas Independent Schools Superintendent Karen Cheser wrote in the letter to parents that Lilliana had been “beloved by all. Athletic Director Kevin Nieporte described her to the Courier-Journal as “one of our most talented cheerleaders” and as “the nicest” person.

Lilliana Schalck was honored at the Midwest National Championship. Her father shared a video from the event, embedded above. It shows the massive crowd chanting “We are P-A,” referring to Premier Athletics, the team she competed for. Dan Schalck commented on the video, “Thank you-she would have been thrilled!”

Their hearts all loved this sport. That’s what makes this great big cheer world such a tight knit family. I’m so sorry @PA_Premier, Our hearts broke with yours. Rest In Peace angel. pic.twitter.com/XnznRHJYnh

A moment of silence was also held at the Convention Center. A Twitter user with the handle @KimmyD posted the photo with the caption, “Their hearts all loved this sport. That’s what makes this great big cheer world such a tight knit family. I’m so sorry @PA_Premier, Our hearts broke with yours. Rest In Peace angel.”

4. Vigils Were Held at Highlands Middle School & By Premier Athletics the Day After Lilliana’s Sudden Passing

Lilliana Schalck’s school and cheer community held vigils for her on Sunday, February 24. Premier Athletics of Northern Kentucky held a vigil in the afternoon. The group wrote on Facebook asking people to “remember our sweet angel we have tragically lost. Our hearts are completely broken for the Schalk family. We want to take the time to honor Lillana and pray with our friends and family here in NKY.”

A second event was held at Highlands Middle School that night. Hundreds of people arrived to pay their respects and write down notes to be shared with Lilliana’s family, according to the Enquirer.

Fort Thomas Schools shared on social media that counselors would be available for other students to talk to about their grief.

Tributes poured in on social media for Lilliana Schalck. Blue ribbons were passed out at the Sunday vigils and friends displayed blue hearts on social media in her honor.

Highlands Cheerleading shared a video of Lilliana being tossed in the air, writing simply, “Our sweet Lilliana ?!” The person who runs the page also wrote in another post, “It is with a heavy heart that I post, one of our precious girls passed away last night, and it’s devastating. I have been trying to figure out how to put into words the grief and heartbreak and I have no words of wisdom, as Lilliana was an amazing, talented, sweet, thoughtful, kind, fun loving girl.” 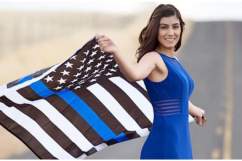