Georgios Papanikolaou, a Greek cytopathologist, is the focus of today’s Google Doodle. He’s considered a pioneer in the field of cancer detection, and he worked with his wife to invent the medical test known as the “Pap Smear.” May 13th would have been his 136th birthday.

Here’s what you need to know about Papanikolaou:

1. He Studied Music As a Child Before Turning His Focus Towards Medicine

Papanikolaou was born on May 13, 1883 in Kymi, Greece. He was the second son of Nikolaos Papanikolaou, a popular physician who would eventually become a Member of Parliament. He developed a musical interest from a young age, and according to Greece Is, he studied the violin for eight years at the Lautner School of Music.

Papanikolaou also learned French, as it was considered to be a language necessary for young Greek gentlemen to speak. By the time he attended the School of Medicine of the National and Kapodistrian University of Athens, however, his interests began to shift. Greek tradition dictated that the firstborn son follow in his father’s career path, but Papanikolaou’s brother opted for law instead. This left the fifteen-year-old Papanikolaou to take up his father’s mantle as a physician.

He graduated from the School of Medicine in 1903, and went on to attend the University of Munich, where his studied biology and zoology. These particular fields captivated him, and he graduated with a PhD in 1910. He was 27. He wrote to his father at the time: “I am no longer a dreamer. Science snatched me out of Nietzsche’s hands. I’ve got my feet on the ground.”

Papanikolaou served as a lieutenant during the First Balkan War, during which time he began exploring opportunities in the United States. He decided to emigrate to New York on October 19, 1913, along with his wife Andromahi Mavrogen. According to the Singapore Medical Journal, neither spoke English when they arrived. They had little money to their name, and had to take whatever position they could to make ends meet.

During this time, Andromahi (or Mary) worked as a seamstress at a department store and Papanikolaou worked a number of odd jobs; including rug salesman, newspaper clerk, and a violin player at a restaurant. In 1914, he managed to get hired on at New York University’s Pathology Department and Cornell University Medical College’s Anatomy Department. Mary later joined him as a technician.

Papanikolaou’s earliest research involved running tests on guinea pigs and studying basic human psychology. He turned his focus towards sex chromosomes in 1916, when he discovered that reproductive cycles in the experimental animals could be timed by examining smears of their vaginal secretions.

3. He Invented the Pap Smear, Which Allows for the Detection of Cervical Cancer, In 1928

Pap and HPV Testing | Nucleus HealthVisit our website to learn more about using Nucleus content for patient engagement and content marketing: http://www.nucleushealth.com/ The Pap test and HPV test are used to screen for cervical cancer. This video explains why and how these test are performed. ANH171892018-02-13T21:24:49.000Z

Papanikolaou’s discovery led to more research involving the human reproductive system. Singapore Medical Journal reports that he was able to spot the differences between the cytology of normal and malignant cervical cells upon a simple viewing of swabs smeared on small, microscopic slides. This allowed for detection, and in some cases, prevention, of cervical cancer. His wife Mary served as his test subject.

Papanikolaou invented the procedure in 1928, but his findings did not gain traction until they appeared in the 1943 book Diagnosis of Uterine Cancer by the Vaginal Smear. The book described the physiological changes of the menstrual cycle and the influence of hormones and malignancy on vaginal cytology, and bestowed Papanikolaou with a reputation as a cancer detection pioneer.

The procedure is commonly known as the Pap smear or test, and remains the gold standard in screening for cervical cancer. The reason it remains the standard is that it is both easy to perform and can be interpreted accurately on a consistent basis. Singapore Medical Journal states that the Pap Smear has resulted in a significant decline in the incidence of cervical cancer.

4. He Became Cornell’s Emeritus Professor In 1951 & Continued His Cytology Research

Papanikolaou became Emeritus Professor at Cornell University Medical College in 1951. He continued his research on cytology, and published Atlas of Exfoliative Cytology, a treatise on the cytology of both healthy and diseased tissue, in 1954. Papanicolaou’s output would only grow from there, as he published four books and over one hundred articles before his death.

Papanikolaou was the recipient of many awards during his career. He received honorary degrees from universities in the US, Italy and Greece. He was given the Borden Award of the Association of American Medical Colleges in 1940 and the prestigious Albert Lasker Award for Clinical Medical Research from the American Public Health Association in 1950.

According to Health Matters, Papanikolaou was also nominated several times for a Nobel Prize, and awarded the Cross of Grand Commander, which is the highest decoration bestowed by the King of Greece. Papanikolaou retired from Cornell in 1961 and moved to Florida, where he founded the Cancer Institute of Miami. The Institute is still open today, but it’s been renamed the Papanicolaou Cancer Research Institute in his honor.

5. He Suffered a Fatal Myocardial Infarction & Died In 1962

Such a simple test that has helped #women around the world so much. Since this month I am working with #cervical #cytology I thought it important to dedicate a post to the man who spend his life working and developing and ultimately making it as perfect as he could so that today it is possible to detect the problem before it becomes too big of a problem. #papsmear #georgiospapanikolau #laboratorymedicine #diagnosticmedicine #pathology #cytology #instapatologia

Papanikolaou suffered a fatal myocardial infarction and died on February 19, 1962. He was 78. He had arrived in Miami only three months earlier, and was unable to complete his work on aforementioned cancer institute. In 1978, his work was honored by the U.S. Postal Service with a 13-cent stamp for early cancer detection.

A 1998 remembrance summed up his influence by stating, “His monumental contribution proved that cancer can be beaten… the Papanicolaou screening test will remain one of the most powerful weapons against this disease. Those of us who looked upon him as a guiding star will always owe him our gratitude, and those women who were helped by his test owe him their lives.”

Mary Papanikolaou continued her husband’s work in Miami. She said that her husband was so committed to his work that she eventually came to have a passion for it herself. “There was no other option for me but to follow him inside the lab, making his way of life mine,” she explained. Mary also said that her devotion to her husband’s work was so strong that she decided not to have children in order to be by his side. According to Greece Is, she never regretted it. Mary died in 1982. 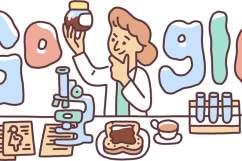 Read More
Google Doodle
Georgios Papanikolaou is the focus of today's google doodle. Learn more about the Greek cytopathologist and his career.