Video 1444 is a YouTube video that has gone viral as part of a purported “curse” story. The graphic video has been spread to social media users who are unaware of what they are clicking on. The grisly video shows a Russian man dying by suicide by shooting himself in the head with a shotgun while sitting on a couch.

The 17-second video appears to have been shared previously on sites and in communities that post extremely graphic photos and videos known as gore. The video began trending the weekend of October 19 and October 20 on YouTube, Facebook, Twitter and Google. The video spread again on December 9, 2019, after it was mentioned on TikTok. It does not appear that the video was posted there, but TikTok users were looking for it. The actual video has resurfaced on YouTube.

Multiple versions of the video have been uploaded on YouTube and social media sites with different titles, many including the term “video 1444.” Social media users have linked to the video without informing those who are clicking on it what is in the video in a morbid “Rickroll” style.

According to YouTube, content that promotes self harm or is intended to shock or disgust users is explicitly prohibited by its policies. YouTube says it has expanded its use of automated systems to flag and remove content that violates its policies more quickly, according to a recent blog post.

YouTube’s most recent quarterly Community Guidelines Enforcement Report shows that over 87 percent of the 9 million videos removed by YouTube in the second quarter of 2019 were flagged first by its automated system. More than 80 percent of those videos flagged by the automated system were removed before they received a single view, according to YouTube.

Here is what you need to know about the video 1444 YouTube trend: 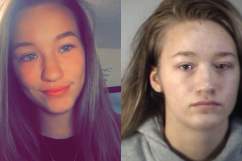 The video is real. The man in the video is an 18-year-old from Russia named Gleb Korbalev, according to Twitter user @Jaxieon, who discovered the details behind the video on Russian websites. Korbalev was a university student in Moscow. He live-streamed his suicide on the Russian social media website VK, which is similar to Facebook. The video was spread on VK, and also on Telegram and a Russian site called 2ch.

The 17-second video shows a man sitting on a couch in front of a painting holding a Saiga-12 shotgun to his head. He makes a brief statement in Russian and then pulls the trigger. A gunshot can be heard and the brutal aftermath of the shooting is seen. He appears to be saying, “good bye,” in Russian, before pulling the trigger. A longer version of the video shows Korbalev’s body on the couch for more than two hours before police arrive.

If you or someone you know is having suicidal thoughts, the toll-free National Suicide Prevention Lifeline at 1-800-273-TALK (8255) is available 24 hours a day, seven days a week. All calls are confidential. You can also text HOME to 741741 to reach the Crisis Text Line, which provides 24/7 support with a trained crisis counselor. You canalso call the NAMI (National Alliance on Mental Illness) helpline at 1-800-950-6264, or text NAMI to 741741. NAMI also has programs for family and caregivers that provide education and support.

The video went viral after it was posted a now-deleted YouTube channel called GORE. It was up for about 16 hours before it was deleted, according to YouTube users who saw the original video before it was deleted. The channel and the video have since been taken down, but the clip has been reuploaded hundreds of times.

The video has also been shared with a “creepypasta“-esque story about it being tied to a curse. Viewers are warned that by viewing the video, they will be cursed. The “curse” story claims that the curse can be broken by replying to the video with a version of the date October 20, such as 20-10-19.

Kurosagi8, a user on the Reddit subreddit r/Nightmareexpo, which is for people interested in the “dark side” of the internet, wrote, “They’re saying basically it’s some sort of video taken off deep Web, the theory is this dude planned it before hand and cursed it. So anyone who watches it must say the date of his suicide or they’re gonna have terrible luck. It might be some sort of cultist prank … But it weirds me out it doesn’t have kid protection and how long it has been on the platform. Considering how we all get targeted for minor stuff how something this big is still up?”

Many of the reaction videos and tweets about the video are in Spanish and the memes about the curse appear to have originated in Mexico. Several Mexican news outlets have been covering the viral video story. But the original video was likely recorded in Russia. 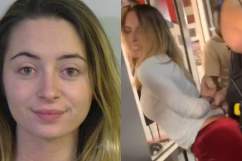 April Teale: Woman Grinds on Cop & Says ‘You Like That’ in Viral Video

Social Media Users Are Warning Others About the Video

yall if u see a video with this image pls keep scrolling, dont watch it, close the app, do whatever it takes but its very graphic, its a guy committing suici/de and i repeat its VERY GRAPHIC dont search 1444 or if you see a tweet with that number keep scrolling PLS DONT WATCH IT pic.twitter.com/P1NUY1tCmq

Social media users have been warning others about the video, because it is being linked to without a warning about the graphic content in the video. Others have said that the video is being seen in autoplay on YouTube and have advised others to turn off autoplay to avoid stumbling upon the gruesome 1444 video.

One Twitter user, @irkedpoc,” tweeted, “yall if u see a video with this image pls keep scrolling, dont watch it, close the app, do whatever it takes but its very graphic, its a guy committing suici/de and i repeat its VERY GRAPHIC dont search 1444 or if you see a tweet with that number keep scrolling PLS DONT WATCH IT.” The tweet has more than 4,000 retweets and 3,000 likes.

Another user, @btsaoas, tweeted, “tw// suicide/graphic content … y’all dont search 1444 on twitter either some people uploaded the video from youtube i saw it by accident and im literally crying.”

On Reddit, a poster warned, “Watch it if you want but don’t force others to, I’ve seen people get tricked by others telling them to watch it, if you get sent a random YouTube video, proceed with caution or do not proceed at all.”

Editor’s Note: An earlier version of this report stated that the man in the video was holding a rifle. He was actually holding a Saiga-12 shotgun.

Read More
Breaking News, Social Media, Video, Youtube
Follow Heavy ↓
Video 1444 is a YouTube video that has gone viral as part of a purported "curse" story. The graphic video has been spread to social media users unaware of what they are clicking on.