Getty How much would you receive in the second round of stimulus payments?

President Donald Trump proposed last month that Americans should receive a vacation tax credit of up to $4,000 for domestic travel as a way to provide economic stimulus amid the ongoing coronavirus pandemic. Trump suggested the government could reimburse vacationers for spending at U.S. hotels, theme parks, restaurants and more through the end of 2021, Forbes reported.

So how much could you stand to benefit if such a tax credit were enacted?

Trump’s remarks came during a roundtable discussion with restaurant industry leaders in May. “…Create an ‘Explore America’ — that’s ‘Explore,’ right? Explore America tax credit that Americans can use for domestic travel, including visits to restaurants. That’s a big deal,” he said.

A May 19 press release from the U.S. Travel Association applauded Trump’s suggested credit. The statement read in part, “An ‘Explore America’ tax credit and campaign will do wonders to put America back on the path to prosperity. We applaud the president’s support.”

On June 13, Forbes was the first to report a proposed dollar figure for the tax credit.

Americans Could Receive Up to $4,000 in Tax Credits for Domestic Travel Expenses

A $4,000 vacation tax credit is being tossed around. You would get credit for money spent on domestic travel, hotels, restaurants, and amusement parks, among other things.

What do you think?? We're talking about this NOW on #13Sunrise! Join us!!https://t.co/ojlJ5g3HqS

The proposed “Explore America” tax credit would provide economic support to Americans in a recession caused primarily by the pandemic — but it wouldn’t be as straightforward as the first stimulus payment.

Rather than receiving money directly through a check, direct deposit or debit card payment, taxpayers would be able to file for tax deductions for domestic travel expenses “incurred while traveling away from home in the U.S.,” Forbes reported. The proposal would offer tax credits for amounts over $50 spent at American restaurants, hotels and other businesses in the travel industry, according to Forbes.

Forbes first reported the $4,000 figure for the vacation credit. It is not clear how eligibility would be determined, but Forbes reported “the credit would cover up to 50% of a household’s total vacation expenses” up to $4,000.

The Tax Credit Is Not Included in a Bill Yet, but the White House Supports the Passage of a 4th Stimulus Package by August 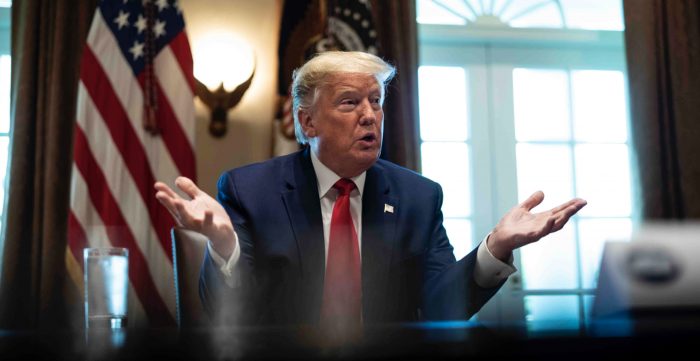 Kevin Hassett, a senior economic advisor to Trump, has confirmed the high likelihood of another stimulus package being passed soon. He said, per the Wall Street Journal, “The president stated that we’re probably going to have to have some targeted help for the travel and leisure industry because that’s the hardest hit, and it’s going to be slowest to come back. Other pockets like that might emerge in July that we see that might require some targeted policies and we’re studying it.”

Though Hassett pointed out that many of the details around a fourth stimulus package are yet unknown, he maintained that “absolutely, 100 percent” there would be another stimulus package passed in the coming months.

Earlier in June, U.S. Treasury Secretary Steve Mnuchin confirmed that the Trump administration is “very seriously considering” another round of direct relief payments to qualifying Americans in light of the economic distress caused by the COVID-19 pandemic.

READ NEXT: Learn More About the ‘Explore America’ Vacation Credit

Loading more stories
wpDiscuz
0
0
Would love your thoughts, please comment.x
()
x
| Reply
President Trump proposed a vacation tax credit of up to $4,000 for domestic travel as a way to provide economic stimulus amid the ongoing coronavirus pandemic.