The jury’s still out on whether Ronaldo or Lionel Messi is the best soccer player in the world, but Ronaldo takes the prize when it comes to baller-status. This guy makes the select few $20-million-a-year baseball players seem like Little Leaguers, and he’s not trying to hide it, either.

Here are five things you need to know about Ronaldo’s outrageous net worth.

1. He’s The Highest-Paid Player In The World

Ronaldo, the heart and soul of Real Madrid and Portugal’s prodigal son, rakes in $73 million a year. We’re talking a massive $49 million from Real Madrid for the Portuguese national team captain, and an additional $24 million in endorsements. It all comes with some clout, too: Repucom (a sports management firm) ranks Ronaldo as the most recognized player in the world, with 83 percent name recognition internationally.

This $150 million is an estimated total of his soccer and endorsement earnings combined but keeps Ronaldo out of the company of the world’s richest people. According to Forbes, there are at least 500 billionaires in the world to whom Ronaldo has a lot of catching up when it comes to cash flow. He’s the second highest-paid athlete in the world, however, second only to boxer Floyd Mayweather.

3. Any Club Who Snags Ronaldo Will Owe Real Madrid $1 Billion

You read that right: any club that wants to sign Ronaldo away from Real Madrid will need a ONE BILLION dollar check in hand to do so. It’s not the first time, either, that Ronaldo has commanded a leading amount for a buy-out: Real Madrid set the record for highest soccer transfer of all time when they signed Ronaldo away from Manchester United for a whopping $93 million in 2009.

4. His Pretty Face Is a Big Reason He’s so Rich

With more than 82 million likes on Facebook and 26 million followers on Twitter, Ronaldo is a gem for any company looking for mass-market appeal. He has deals with Tag Heurer, Emirates airlines, Samsung, Toyota Motor, and at the end of 2013 signed a £40 million (about $68 million) boot deal with Nike. It’s the world-record for shoe endorsement contracts, trumping even Michael Jordan’s iconic contract with the global giant.

5. He Thinks Opposition Fans Dislike Him Because He’s So Rich

And handsome. And such a great player. In 2011, the legions of fans who dislike Ronaldo because he’s cocky were justified when Ronaldo publicly proclaimed that people didn’t like him because he was too rich, handsome, and talented. He told the interviewer that there was “no other explanation” as to why people didn’t like him—after enduring yet another game in which fans in the stands hurled insults at him on the field. Allegedly Ronaldo isn’t only cocky to the press, either. In 2013, Jose Mourinho, manager for Chelsea, was quoted saying that Ronaldo assumes to know everything and rarely takes coaching advice from his coaches. 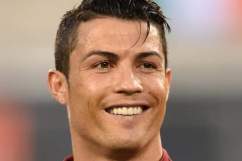