Caroline Wozniacki, the former Number 1 on the WTA tour is playing Italian Sara Errani at the U.S. Open on September 2.

“She’s not going to miss very much. I will need to stay agressive and try, and you know, just go for my shots,” she said in an interview with the U.S. Open.

Here’s what you need to know about the 24-year-old Dane who is wowing us on and off the courts.

1. She Got Her Hair Caught in Her Racket

Her long braid got wrapped around the grip of her racket while she was hitting a forehand in her second-round U.S. Open match.

She continued playing, and attempted to hit a backhand on the next shot.

“I almost took my head off. It was really tangled up good, so I didn’t have a chance,” she told reporters afterwards.

She continued, “It’s one of those things. Us women, we keep it interesting.”

Wozniacki took it all in stride, later tweeting the message below:

As a Number 10 seed, she defeated the fifth-seeded Sharapova on Sunday, 6-4, 2-6, 6-2, in the fourth round. She told the New York Times, “This one was a great win for me. Maria, again, is a good player. For me, I think mentally as well, to get that in my pocket is kind of nice.”

Sharapova told the Daily News about her worthy opponent:

“She’s a great retriever, especially in these conditions. I felt I went for too much. She’s very good about getting balls back. She’s better now at what she’s done her whole career. She’s fit, hitting a little deeper on balls up in the air. 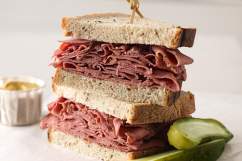 US Open Food: Top 5 Eats at the Food Village

The athlete announced her intentions on CBS last month.

In fact, she credits her training for the race to be helping in her tennis game. ” Definitely it’s helping, because I felt fresh out there and I felt like I could keep going,” she told the US Open in an interview.

On her personal website, she explained that she is raising money for charity as a New York Road Runners Team for Kids Ambassador. The charity raises money for running programs for kids who do not get access to exercise.

4. Her Wedding to Rory McIlroy was Called Off

Her wedding to star golfer Rory McIlroy was canceled in May after the athletic pair had been dating since 2011.

“It was mutual and we both thought it was the best for us, the best for both of us. Time to move on, and I’ve said all that I need to say,” McIlroy said at the time.

A week after the split, she exited the French Open in only the first round. In the press conference that followed, she said:

I don’t really want to talk about my personal life. I hope that you all can understand that. The only thing I really have to say is that, you know, [I want to] thank everybody for their support and sweet messages.

During their relationship, there was talk that their respective games suffered.

The Guardian put it best by saying:

When they met, it was arguable that Wozniacki was the bigger star. Since they met McIlroy has won two majors but been criticised for his inconsistency and Wozniacki has slipped from No1 to No9, prompting the inevitable suggestion that their relationship has been bad for their respective games.

After the breakup, when PGA asked McIlroy how his game was affected, he said, “Well, I think it has happened to me for the better. I’ve put a little bit more time into my golf and refocused me in a way. It’s the only thing ‑‑ not the only thing I have; I’ve got my family and my friends, but I just immersed myself in my game. I’ve practised hard and I’ve done all the right things, and I’m reaping the rewards.”

Wozniacki seems to be over her ex, and can even laugh at his expense. In July, she posted the photo below to Instagram, with the caption, “Out and about in Istanbul. It’s been three years since I have worn high heels on a normal day out. #feelsgood #looksgood #shopping #highheels #sun.”

It’s an apparent dig at McIlroy, who is shorter than her in heels.

5. She Has a New Admirer

At Wimbledon, Spanish tennis player Feliciano Lopez made it obvious that he was following her matches.

After that, in a postmatch interview, Wozniacki said, “Yeah. I noticed he was on the sidelines in Eastbourne. No, he’s a great guy. Playing well. This is very awkward.”

On July 9, she sent out this tweet, further fueling dating rumors.

Today has been a good day.. pic.twitter.com/BQEp05kR8c 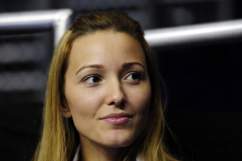