Rasheedah Watley is the ex-girlfriend and high-school of Chicago Bears star Brandon “The Beast” Marshall. She was named by celeb lawyer Glorida Allred as the victim of Marshall’s domestic abuse and violence. Allred was joined by Watley’s father, Clarence, and friend, Kristeena Spivey, as they lambasted NFL Commissioner Roger Goodell’s handling of the domestic abuse allegations.

1. Marshall Was Acquitted of Abusing Watley

Marshall, in 2009, denied ever hitting Watley, saying “I have never put a hand to Rasheedah Watley.” In 2009, Marshall was acquitted of criminal charges in relation to the case and beat a civil suit in 2012. In the criminal trial, Marshall didn’t testify.

Her friend Kristina Spivey, told the media in September 2014, “I called police to have Brandon arrested” over his alleged abuse. Spivey added, “she called and emailed Goodell and never got a call back. A few months later it was announced he’d get a three-game suspension but it was reduced to one day.”

How many women will have to die or pass abuse onto their children … In 2007 Commissioner Goodell called Michael Vick’s acts against animals reprehensible … does that mean that women’s live’s safety and worth are less than those of dogs?

3. Her Father Said in 2009 That the Broncos Asked the Watley Family to Give Marshall a Second Chance

Clarence Watley had spoken to ESPN about Brandon Marshall’s alleged behavior back in 2009. Also featured in the interview was Watley’s mother, Vienna, who says:

[Rasheeda] said Brandon had obviously hit her, assaulted her and he’s very upset by it and we needed to understand where he was coming from and he tried to get (Betsy Klein, Bronco’s director of player and organizational development) to help him work through it . . . that we needed to give him a second chance.

I told Betsy, I said you guys (value) the trophy case in the Broncos’ organization more than you are valuing the protection and safety of my daughter.

Rashida's father is speaking about how his daughter was the victim of abuse from Brandon Marshall since his senior year in college.

The Watley family have said that Marshall’s alleged abuse of Rasheeda Watley began in the Broncos’ star’s senior year of college.

In 2012, when Brandon Marshall moved to the Chicago Bears, Watley was asked if she thought the move would change Marshall, she told the Chicago Tribune:

It’s very foolish to think that, I don’t know how many chances you can give somebody. I’m really fearful for someone’s daughter or sister. The guy needs some real help…Brandon thinks he can bash people and get away with it because he has gotten away with it so I don’t see why he’d think he can’t get away with it again.

5. Brandon Marshall Was Once Stabbed By an Angry Lover

Between 2009 and 2011, Brandon Marshall had a violent relationship with his wife, Michi Nogami-Campbell. In 2008, he arrested for disorderly conduct after fighting with her in Atlanta. Later, in 2011, Nogami-Campbell was arrested for stabbing Marshall. Around the same time, Marshall was diagnosed as having a borderline personality. Since the diagnosis, Marshall has, according to ESPN, “become for mental health what Magic Johnson is for HIV.” 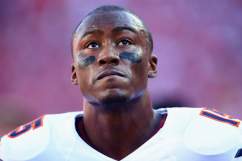 Brandon Marshall Accused of Assault: 5 Facts You Need to Know