After a storm-delayed first half in which both offenses exploded, the Gamecocks benefited from two close calls in the last five minutes. With five minutes remaining in the game, Georgia attempted a 28-yard field goal but it was wide right by inches. Then, on the ensuing drive from South Carolina, the Gamecocks converted a fourth-and-inches attempt by a hair in order to keep the drive alive and run out the rest of the clock.

In what has become an annual dual between two of the SEC East’s best teams, the South Carolina Gamecocks host the Georgia Bulldogs Saturday.

The Bulldogs already claimed a stake in the national championship picture when they destroyed Clemson in the opening week. But, before the Bulldogs can think about Dallas, they need to get by the Gamecocks, which have caused fits for them recently.

Keep it here for live updates and highlights throughout the game. 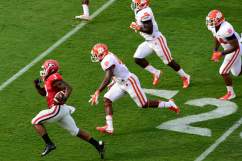