The day after LeBron James announced to the world that he was taking his talents back to Cleveland, the Cavs announced that they had agreed on the terms of James’ new contract.

Though the team didn’t formally announced the terms, ESPN’s Brian Windhorst reported that James had agreed to a two-year, $42.1 million deal designed to take advantage of the massive haul of money the league will receive when its new TV contracts take effect in 2016.

The deal has an opt-out clause that would allow James to become a free agent again next summer, but all signs point to him remaining in Cleveland long-term.

As Business Insider’s Tony Manfred explains, James’ decision to sign a short-term deal rather than the 4-year, $94.5 max contract he could have accepted under the league’s collective bargaining agreement looks particularly brilliant after the terms of the league’s new TV deals were announced.

ESPN and Turner will pay the NBA a reported $2.66 billion per year — a 186% increase from the previous deal. Because the salary cap is directly tied to “basketball related income” (of which TV money is a huge part), the deal will increase the salary cap by an estimated $25.8 million (45%) starting in 2016-2017. And, significantly for LeBron, it will increase the value of the league’s maximum contract by $9 million per year.

That’s a huge spike, and LeBron is positioned perfectly to take advantage of it because he took the unusual step of signing a two-year deal instead of a four-year deal.

In the essay James wrote for Sports Illustrated announcing his return, he made it clear that he intends to stay in Cleveland for the long haul, so unless circumstances change, we’re unlikely to witness The Decision, Part 3 as James works on his next contract.

But by signing a short-term deal this time around, the best player on the planet made it extremely likely that he’ll be one of the most well-paid players on the planet well into the future. 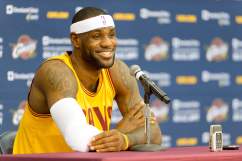 Read More
Basketball, Breaking News, LeBron James, NBA
LeBron James signed a two-year contract with the Cleveland Cavaliers that sets him up for a massive pay day in the summer of 2016.