A little TBT…our fav engagement photo from 2004. Has it really been ten years since this pic?! WHAT?! pic.twitter.com/ywp67sGh1B

Ryan Vogelsong will take the mound for the San Francisco Giants in Game 4 of the World Series Saturday night. But he might not be pitching if it weren’t for his wife, Nicole’s support.

1. She Supported Him Through Baseball Struggles

It might be hard to believe now, but Vogelsong was a struggling pitcher for much of the 2000’s. He struggled to find a main-stay team, shopping around the MLB, and was even sent overseas to Japan after failing to make an MLB team. But in 2010, he returned to the U.S., and after a successful stint in the minor’s, has made a name for himself in Major League Baseball.

“We had so many nights he would come home and we couldn’t understand why he couldn’t be the pitcher he wanted to be,” Nicole Vogelsong told the Mercury News. “As his wife, who adores him more than anything in the world, that’s the one thing I know I can’t help him with.”

Prior to the 2011 season, he latched on with the San Francisco Giants where he slipped into their 5th starter slot when Barry Zito went down with an injury. He has since become an MLB All Star and won a World Series title.

“We look back now at our journey, and people say, ‘Was it worth it? Would you do it all again?’ ” Nicole Vogelsong said. “Absolutely. Every minute of what’s going on now is worth it all. I believe this is his time to shine, and I couldn’t be more proud no matter what happens.”

When Vogelsong and her husband met, she was a singer at a bar in Nashville. The night they met, Ryan was at the bar with friends before introducing himself to her.

According to Nicole Vogelsong, she was interested but played hardball.

3. They Got Engaged on the Beach

One of the Giants investors sent us an AMAZING photo book from the series. This was the last pic; #love pic.twitter.com/uiaSTaQo

The couple dated for two years before taking a vacation to the Bahamas. After a long walk on the beach, where Nicole said he was building his courage, Ryan proposed. They were married on November 12, 2005 in a ceremony near Pittsburgh, where Ryan was pitching for the Pirates.

4. They Have One Child and One Dog

The couple has one child, Ryder, who Nicole refers to as “the Vogelchild,” on Twitter. They also have a 12-year-old dog named Yoda, a chihuahua, who was the ring bearer at their wedding.

5.She Had A Painting Done of Her Husband

Replacing an injured Barry Zito in San Francisco’s rotation, Vogelsong received a noisy ovation upon being relieved for his first game in San Francisco. When he removed his cap and held it aloft to return the fans’ salute, the cheering grew even louder.

Vogelsong’s wife, Nicole, had a painting done of Vogelsong doffing his cap on that afternoon. The artwork now hangs in the family kitchen.

It’s also one of her husbands favorite moments.

“That’s still one of the most special moments for me on a baseball field,” he told reporters. “It includes going to the World Series, being on the All-Star team, playing in the World Baseball Classic. That day — it was Mother’s Day — that moment is vividly imprinted in my mind. The feeling and the crowd noise. [Given] the journey I had been on to that point, that was the pinnacle for me, to come off to a standing ovation like that. Obviously the story has gotten a lot better since then, but that tells you how special it was because it’s still right in the front of my mind.” 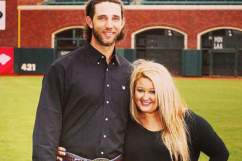