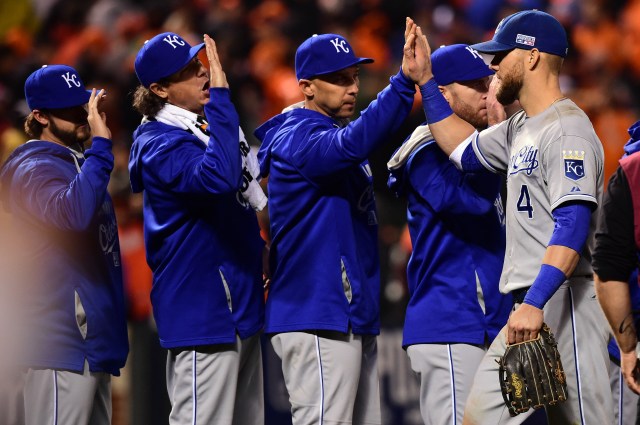 Here’s a link to the stats.

The Kansas City Royals have defeated the Baltimore Orioles 8-6 in ten innings. It was a hard fought game,wit h Alex Gordon playing the hero in a few different innings. The Orioles tried valiantly, tying the game in the middle innings and starting a rally in the bottom of the tenth, but it fell short as the Royals take the first game of the series.

Royals shortstop Alcides Escobar has never hit more than five home runs in a season, but he smacked a Tillman fastball to left field for his first ever postseason home run and gives the Royals a 1-0 lead. Tillman struggled to recover, giving up a couple of hits and a walk before Alex Gordon hit a two out, broken bat double to right field that cleared the bases and padded the Royals’ lead to 4-0.

Gordon wasn’t done with the dramatics that inning. The Orioles attempted a rally and scored a run, but hopes of more that inning were squashed on a fantastic diving catch by Gordon to end the inning. Watch below:

Orioles Came Back to Tie The Game in the Middle Innings 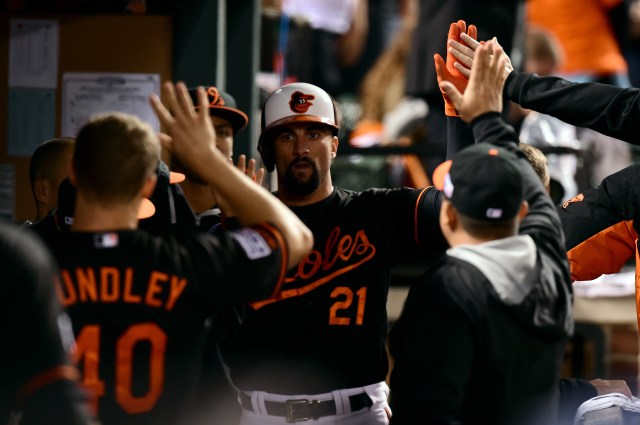 Nick Markakis has seen some dark times since he came up with the Orioles in 2006. You think he’s ready for this team to finally reach that next level? Markakis was in the middle of all scoring innings for Baltimore with his three hits. His leadoff double in the fifth was the first of four hits that inning, as the Orioles scored three runs to cut the lead to 5-4. He also singled in the middle of the sixth inning, as Royals reliever Brandon Finnegan failed to record an out and gave up the lead. 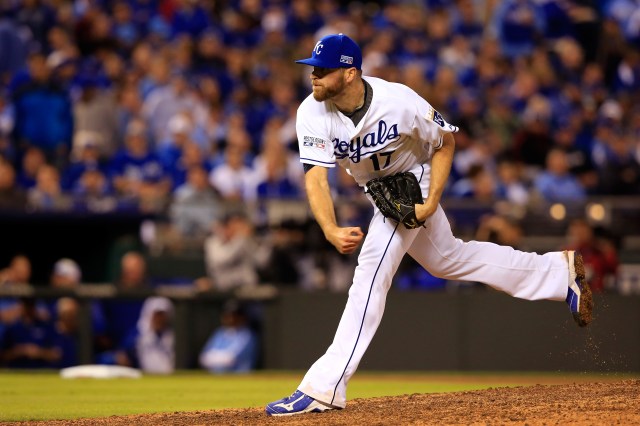 The Baltimore bullpen started their night throwing 4 2/3 scoreless innings, but it wasn’t easy. Zach Britton started the ninth by walking three straight batters, and the Orioles were lucky to get out of that without a run. Royals star reliever Wade Davis, on the other hand, was simply dominant in his two innings of relief. He threw 18 pitches, 15 for strikes, and struck out four. He made pitching the ninth inning of a playoff game look like the easiest job in the world!

Royal Homers in Extra Innings Propel KC to a Win

It took over four hours just to play nine full innings. It took three pitches in the 10th inning for a score change. Alex Gordon got his fourth RBI of the night with a huge extra innings home run to right field, the first earned run the Baltimore bullpen has given up all night. After a walk and a strikeout, Darren O’Day is replaced with the lefty Brian Matusz, who proceeds to give up a two run home run to Mike Moustakas, his third of the postseason. The Orioles attempted a rally int he bottom of the tenth, scoring a run, but it just wasn’t enough and the Royals walked away victorious.

Tonight, the Kansas City Royals play the Baltimore Orioles in Game 1 of perhaps the least predicted ALCS scenario coming into the playoffs. The Royals are looking to make their first World Series since 1985; the Orioles want their first pennant since 1983. James Shields pitched Kansas City to a clinching of the ALDS this past Sunday and gets the start again tonight. Chris Tillman, who won Game 1 of Baltimore’s ALDS against the Tigers, starts for the O’s. An exciting series between two teams hungry for a title begins tonight at 8. Follow along with us!

Read More
Baseball, MLB
The Kansas City Royals defeated the Baltimore Orioles 8-6 in 10 innings in Game 1 of the ALDS. Find out how here!