Maybe karma is real after all. One week after cutting Michael Sam and returning to being hateable, the Dallas Cowboys put on a fantastic display of what an absolute dumpster fire the organization is on Monday Night football. To wit:

Tony Romo signed a six-year extension last year worth $108 million that included $55 million in guaranteed money. The contract was restructured in March to create cap space: $12.5 million of Romo’s $13.5 million base salary was converted into a signing bonus, dropping his 2014 cap hit from $21.773 million to $11.773 million, according to ESPN.com.

Having paid Tony Romo a lot of money–I know NFL contracts aren’t real but geez that one is pretty bad–they were justifiably concerned about his health after an injury to his back on Monday night against Washington. Then the following happened:

Jerry Jones went down to the locker room, presumably treated Romo personally, informed the head coach that the quarterback was ready to play and then stood on the sidelines to ensure this insanely questionable decision was followed explicitly, despite all reason and logic. Now, we’re told that Romo’s availability is all about whether he can take enough horse tranquilizers to play.

Being a Cowboys fan must be emotionally exhausting. To be clear, I do not sympathize with you, at all, because many of you are bandwagoners and secessionists, but I do have a bit of empathy. You really are all dependent on the sanity of one rich dude who can’t be reasoned with. That’s some Game of Thrones style fandom right there. To an extent, every NFL fan is subject to the whims of the incredibly wealthy and spoiled people who own teams. But some of those people will actually, you know, listen to other people and hire people that are qualified and let them do their jobs.

That ain’t Dallas. Nor is it Washington, actually, which is why this past Monday was so ironic.

Also, I’m detecting a trend here: A team cuts Michael Sam and their quarterback immediately gets broken. Happened to St. Louis. Happened to Dallas. Maybe you shouldn’t cut a player because you think his sexual preference is a distraction. Just saying.

New Orleans saved their season last week, and also made Sierra’s initial foray into gambling a failure that she took way too personally–we’ll get to that in a bit–and are now back in their rightful place as contenders in the putrid NFC South. That’s a good thing. Team Gumbo is America’s team, and having them be relevant warms the cockles of even my hate-filled heart. Now we’ve got a showdown between the other relatively competent team in the division, the Carolina Panthers, which has my buddy Casino Joe Scumaci complaining about traffic. This is a Thursday game, so by design it will be terrible, and this division has caused more vomiting than Ebola so it is only worthy of a glance and nothing more.

That picture is just to remind you that the Ravens organization is brilliant at assembling talent and remorseless about what said talent does off the field. They’re sort of like Florida State University, just a bit more polished. And they are obnoxiously competent as a football team. Meanwhile, Ben Roethlisberger is coming off an insane career day and also has a past sketchy as all damn hell. Screw all of you. You’re both consistently competitive, you pride yourselves on the veneer of respectability and you deserve none of it. I hope you tie.

Hey, Cowboys! Other people have cheerleaders now, too. Just saying. Anyway, since we don’t know who is going to be playing quarterback for either of these teams, we’ve got the car-crash factor to play into the fact that both of these teams have six wins this early in the season. How are they doing it? The Cowboys have been analyzed to death: it’s about DeMarco Murray not breaking yet. But Arizona? It’s because Bruce Arians is a damn wizard. He and his hipster hat are my Coach of the Year and it’s not even close. Frankly, I think not including the hat would be a travesty. You gotta respect that hat.

Me telling you to watch this game is like telling you Tom Brady has a hot wife. You know already. Did you know she also makes more money than he does? You did. Did you know Peyton Manning has an attractive wife? You probably surmised it. I guess what I’m saying is that it’s good to be a rich NFL quarterback with crazy skills. That’s not groundbreaking either. Seriously, Manning-Brady games are like a James Bond movie. I’m going to see it even though the plot is always the damn same.

These two quarterbacks produce some extraordinary vines and gifs, so keep an eye out on your Twitter feed, or mine @TJ22Hatter for that aspect of the game. Of the Have-to-Watch games, this one is the weakest sauce I’m bringing, but it’s Monday Night Football, it’s two teams that are going to be in the hunt for the playoffs and two quarterbacks that make me feel less bad about myself than watching Brady or Peyton. But only slightly.

These weird female teacher/male student “OH MY GOD! THAT HAPPENED?-type incidents” keep happening, and it really makes me think that we–as a society–are more messed up than even my cynical self thought. The social construction of our high schools often put very young teachers around students that are substantially — emotionally and physically — similar to people these new teachers used to hang around. Meaning that the good-looking senior quarterback of the football team is someone pretty similar to the type of guy a 22-year-old math teacher could have easily run into at the frat party they attended just a few months ago. That’s troubling, particularly because it’s human and we can understand it. Also mix in the less understandable aspects of stories like this — seriously the tattoo? you’re a crazy person — and we need to come up with a much better screening process for people teaching kids.

All I’m saying is our response to this should be a bit more nuanced than this:

SKEPTICAL SIERRA’S ‘DOG OF THE WEEK

This week’s game: Arizona +4 at Dallas

So Sierra was very upset over last week’s loss. She’s looked glum all week, lethargic when barking at me, and even as she defecates inside the apartment, she does it with an air of shame rather than her normal “I’m going to make you pick this up, bastard!” cadence. It’s tragic what gambling will do to you. Anyway, when I showed Sierra Bruce Arians’s hat, she got excited. When she saw Tony Romo got hurt, she barked at the screen and then munched on a chew toy. I’m taking that as a symbol that she knows Romo is chewed up and might not play, which means that Arizona — getting points!– is where she’s going to bury her doggy bones this week. I feel confident that I’m not misrepresenting her wishes at all.

Lloyd Russell: [referring to his Presidential run, speaking to Mandy, who just drove her car onto a curb] It wasn’t going to happen.

Mandy: You know what the worst part about this is?

Lloyd Russell: Well, I think you dinged up your suspension pretty good.

Mandy: No, Lloyd, it’s the party they’re having, right now, in the West Wing, at my expense.

Lloyd Russell: They’re not having a party in the West Wing.

Mandy: I’ve worked with these people for two and a half years. They like to win and they like to gloat.

Lloyd Russell: There are very serious people working at the White House. A blow is struck for party unity today, there’s no cause to gloat.

[cut to the White House]

Josh: I drink from the keg of glory, Donna. Bring me the finest muffins and bagels in all the land.

Donna: It’s going to be an unbearable day.

Enjoy the weekend and the games everyone. And teachers? Try not to sleep with any of your kids for the next week or so, thanks. 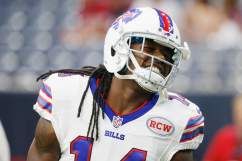