The last time Ole Miss played a home game, the Rebels pulled off the biggest win in school history and the fans tore down the goal posts and partied into the night.

The Rebels raised enough money to buy a new set of goal posts, and two weeks after Ole Miss beat Alabama 23-17, the third-ranked Rebels are back in the Grove when they take on unranked Tennessee Saturday night. Kickoff is set for 7 p.m.

Ole Miss quarterback Bo Wallace is looking to lead the Rebels to their seventh straight win to open the season. (Getty)

Watch ESPN will also air a sky-cam feed of the game. 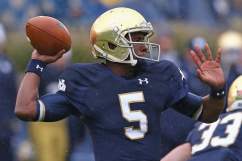