Mike Moustakas and Co. will try to deliver Kansas City its first title in 29 years on Wednesday night. (Getty)

It all comes down to this.

Facing elimination Tuesday night, the Royals pounded the Giants 10-0 in Game 6, forcing a decisive Game 7 Wednesday night in what’s sure to be a raucous Kauffman Stadium. You can follow live updates throughout the game on this post.

San Francisco is after its third title in five years, while the Royals are out to win their first championship since George Brett and Co. beat the Cardinals in 7 games in 1985.

Tim Hudson gets the ball for San Francisco, while Jeremy Guthrie counters for Kansas City in a battle of veterans. Madison Bumgarner, who dominated the Royals in Games 1 and 5, has said he’ll be available out of the bullpen.

Jeremy Guthrie gets the ball for the Royals with the Series on the line. (Getty)

Fox has the telecast starting at 8 p.m., with Joe Buck, Harold Reynolds and Tom Verducci in the booth and Ken Rosenthal and Erin Andrews doing field reporting.

Can’t watch live but still want to watch on TV? MLB Network will re-broadcast the game. You can check out its schedule here.

World Series Game 7: The Pictures You Need to See 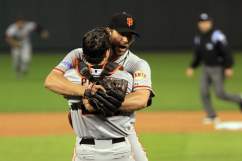 Tim Hudson is trying to pitch the Giants to their third title in five years. (Getty)

Erin Andrews Photos: The Pictures You Need to See