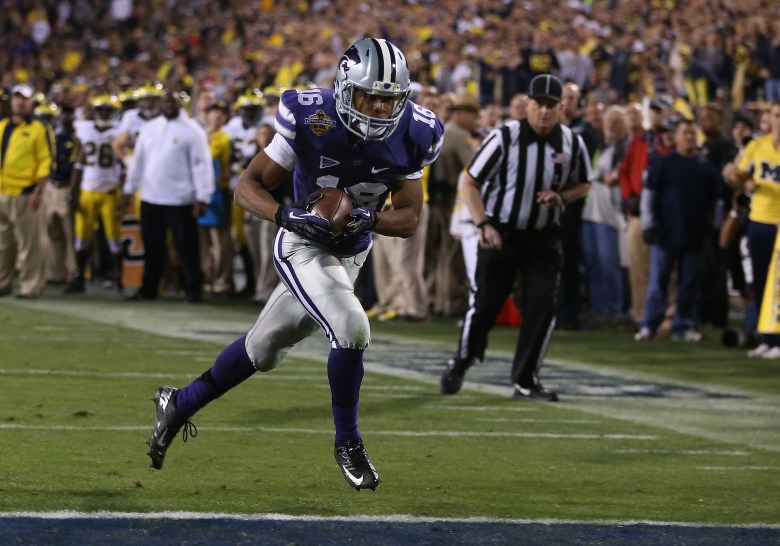 The last time Kansas State was on the football field, it was being run off it. Then-No.6 TCU handed the Wildcats their first Big 12 loss of the season, a 41-20 drubbing on Nov. 8.

It was a crushing blow to Kansas State’s hopes of making the College Football Playoff. The Wildcats were No. 7 and knocking on the door of the CFP Final Four when they entered the game against the Horned Frogs.

Thursday night in Morgantown, No. 12 Kansas State (7-2, 5-1 Big 12) will look to rebound as it faces West Virginia, which is 6-4 overall and 4-3 in the conference. We’ll have live updates throughout the game on this post.

The Mountaineers are coming off a 33-16 loss at Texas and have dropped two straight. West Virginia is 3-2 at Milan Puskar Stadium.

No. 12 Kansas State vs. West Virginia 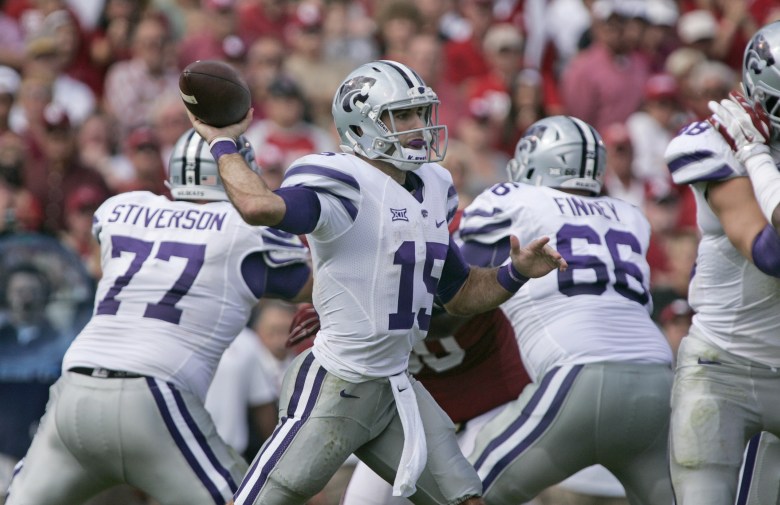 Jake Waters has been a dual-threat quarterback, accounting for 20 total touchdowns. (Getty)

Kansas State will look to get back on track behind the arm and legs of quarterback Jake Waters. Since a loss to Auburn on Sept. 18, the 6-foot-1 senior has been locked in, accounting for 14 touchdowns (11 passing, 3 rushing), while throwing just 1 interception in leading the Wildcats to a 5-1 record. Waters has 13 passing and 7 rushing touchdowns on the season and leads the Big 12 in passing efficiency. His 406 yards on the ground are second on the team behind Charles Jones (430 yards, 11 TDs).

In the passing game, Waters has two reliable targets in seniors Tyler Lockett and Curry Sexton. Lockett, who is Kansas State’s all-time leading receiver with 3,073 yards, has caught 60 passes for 878 yards and 6 touchdowns this season, while Sexton has gone for 53 receptions, 723 yards and 4 scores. Both are coming off 100-yard games against TCU, but face West Virginia’s top-ranked Big 12 pass defense. 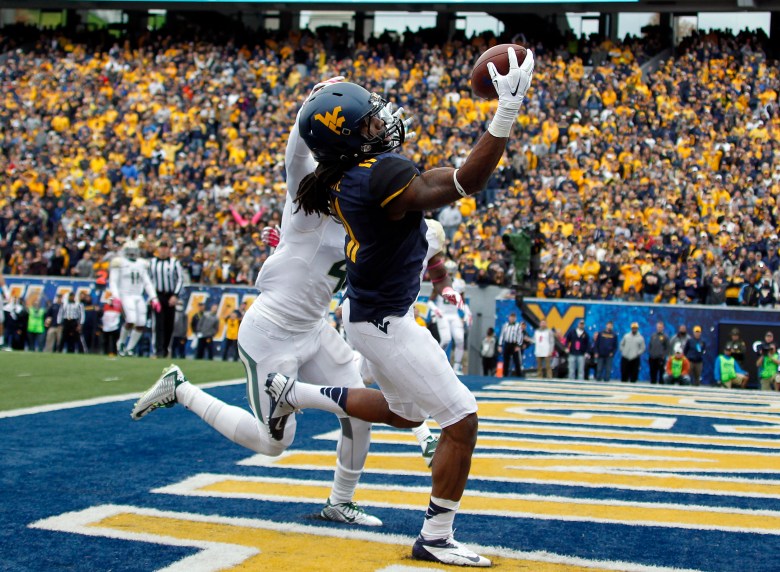 Kevin White is among the nation’s leaders in receiving with 91 catches for 1,207 yards. (Getty)

While the West Virginia defense allows opposing quarterbacks to complete just 49 percent of their passes and is tops in the Big 12 in passing defense efficiency, its run defense has been gashed in the current two-game losing streak. TCU and Texas combined to run for 550 yards and 6 touchdowns on the Mountaineers, something K-State may look to exploit. The 26.4 points per game allowed by the WVU defense ranks in the middle of the pack for Football Bowl Subdivision teams at 62nd.

When it comes to offense, the Mountaineers feature a pass-heavy attack focused on quarterback Clint Trickett and wide receiver Kevin White, a semifinalist for the Biletnikoff Award, which goes annually to the nation’s top pass-catcher.

Trickett is sixth in the nation with 3,173 passing yards. He’s thrown for 18 touchdowns and 8 interceptions, though has has struggled in the past two games with just 1 touchdown and 2 picks. White has 91 receptions for 1,207 yards and 8 scores, while Mario Alford has added 7 touchdowns on 53 catches. The Mountaineers feature a three-headed rushing game with Wendell Smallwood (585 yards), Rushel Shell (560 yards) and Dreamius Smith (411 yards).

West Virginia has a 3-2 record in Morgantown, including a 41-27 win over then-No. 4 Baylor just over a month ago. The Mountaineers score 34.1 points per game, good for 35th in the nation.

Kansas State was playing lights out football until crossing paths with TCU a dozen days ago, while West Virginia has been trending in the opposite direction. But despite the 2-1 record, the Wildcats don’t play their best football on the road and the Mountaineers are a tough out at Milan Puskar Stadium. With this being the final game in Morgantown for Trickett, White and the rest of the WVU seniors, expect the Mountaineers to come out with a little more motivation and focus. 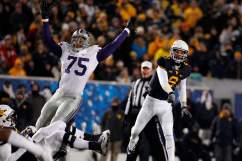 Read More
College Football, Football, Kansas State, Line, Predictions, West Virginia
Coming off its first Big 12 loss of the season, No. 12 Kansas State will look to get back on track when it visits Morgantown for a Thursday night matchup against West Virginia. Read on for all the information you will need for the game.