The Raiders came into Thursday night’s game against the Chiefs last in the NFL in rushing offense. The Chiefs came in without having allowed a rushing touchdown all year.

That made what happened in the first half all the more shocking.

Latavius Murray, a sixth-round draft pick who had been buried on the Raiders’ depth chart behind Maurice Jones-Drew and Darren McFadden, rushed for two touchdowns to give the Raiders a 14-0 lead.

The first one was an 11-yard run with 6:33 left in the first quarter. The second one, though was the real eye-opener.

Looking for Raiders apparel? Check out the Raiders fan shop. 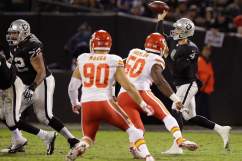