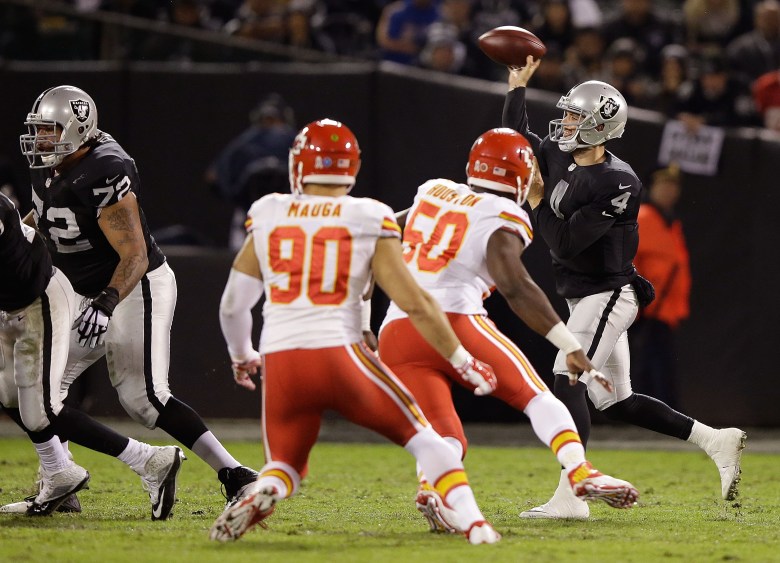 Derek Carr of the Raiders throws the ball during the first quarter of Thursday night’s game against the Chiefs. (Getty)

The Oakland Raiders hadn’t won a game in nearly a year entering Thursday night’s game against the Kansas City Chiefs and trailed Kansas City and Denver by a whopping 7 games in the AFC West. But the Raiders, who entered the game as 8-point home underdogs, proved a whole lot of people wrong, coming away with a 24-20 win that erased the fear of an 0-16 finish.

Derek Carr Hit James Jones to Give the Raiders the Lead

Derek Carr engineered the biggest drive so far of his young career, leading the Raiders on a 17-play, 80-yard drive that ate up 7:21 of clock time and culminated with perfectly thrown 9-yard touchdown pass to James Jones that put Oakland back on top 24-20 with 1:42 left.

The Chiefs Tied it on a Jamaal Charles Touchdown

The Chiefs tied it up with 12:20 left in the game when Jamaal Charles scored his first touchdown of the game: A 20-yard rushing score that made it 17-17 and completed a comeback from 14 points down.

Kansas City then took its first lead of the game on a 25-yard Cairo Santos field goal with 9:03 left in the game.

The Chiefs got to within a touchdown with 1:52 left in the third quarter when Alex Smith hit a wide-open Anthony Fasano on a 19-yard touchdown strike. The score made it 17-10 and brought the Chiefs to within 7 points for the first time since it was 7-0 in the first quarter.

The Chiefs entered the game having not allowed a regular season rushing touchdown since Week 16 last year. That changed with 6:33 left in the first quarter, when Latavius Murray scored from 11 yards out to put the Raiders on top 7-0.

Murray scored again in the second quarter, this time from the opposite end of the field when he took it to the house from 90 yards out to make it 14-0 with 12:28 left in the first half.

A muffed punt gave the Chiefs a scoring opportunity later in the quarter, but the Oakland defense held Kansas City to a 24-yard Cairo Santos field goal that made it 14-3 with 7:19 left in the half.

Looking for Chiefs apparel? Check out the Chiefs fan shop.


Looking for Raiders apparel? Check out the Raiders fan shop.