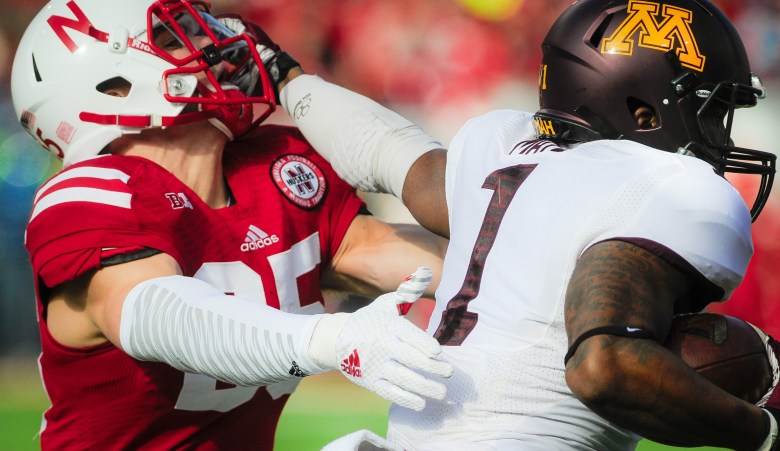 The Minnesota offensive gameplan was to run the ball early and often. The Gophers did that, rushing 53 times for 279 yards.

But it was a clutch 38-yard pass from Mitch Leidner to KJ Maye which kept the game-winning drive alive in the 25th-ranked Gophers’ 28-24 win over No. 23 Nebraska on Saturday.

Minnesota, which rallied from a 21-7 deficit, improved to 8-3 overall and 5-2 in the Big Ten with its first win in Lincoln since 1960. Nebraska dropped to 8-3 and 4-3. The Gophers meet Wisconsin next weekend for the Big Ten West title.

Behind 24-21 with under 5 minutes left in the fourth quarter, Leidner found Maye on 3rd and 6 down the left sideline, giving the Gophers the ball at the Cornhuskers’ 25. Five plays later, Leidner ran in the game-winning score from three yards out.

Click here to see the final box score and stats.

Minnesota Recovered a Nebraska Fumble Late in The 4th Quarter 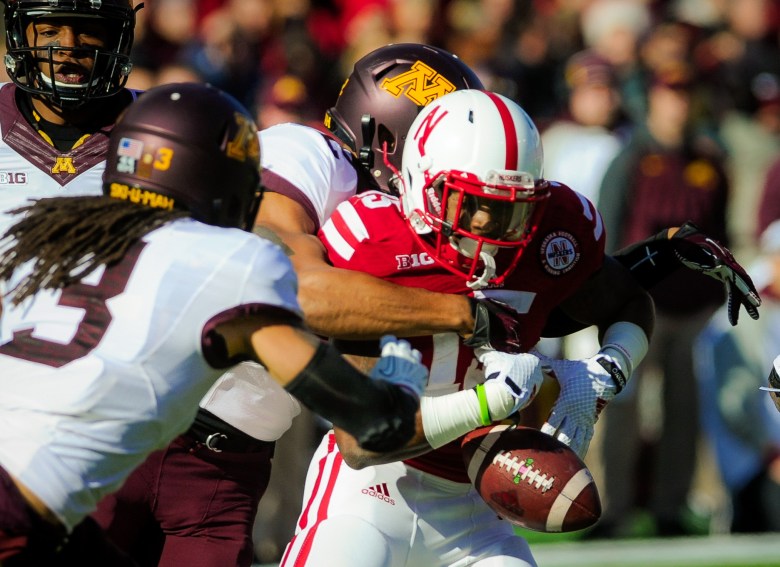 Down 28-24 with under 2 minutes left, Tommy Armstrong Jr. connected with De’Mornay Pierson-El for 28 yards, but the Nebraska receiver had the ball stripped by Minnesota’s Briean Boddy-Calhoun at the Gopher 4-yard line. Pierson-El was flagged on the play for illegal touching, as he stepped out of bounds prior to catching the pass. The penalty was declined. It was Pierson-El’s second lost fumble of the game.

The Cornhuskers had all of their timeouts, but on a 2nd and 7 Donnell Kirkwood ran for a first down and Minnesota was able to run out the clock to get the 28-24 victory.

Quarterback Mitch Leidner found some holes in Nebraska’s defense, running 22 times for 110 yards and 2 touchdowns, including the game-winning score with 3:25 left. He also completed 8 of 17 passes for 135 yards, the biggest play being the connection with Maye on the last drive.

Leidner’s first touchdown tied the game at 7 in the first quarter. You can see the play below.

The Gophers Scored a Touchdown on a 4th Down Play

Bypassing the field goal attempt on 4th and 2, Rodrick Williams Jr. took a handoff 19 yards for a touchdown, cutting Nebraska’s lead to 24-21. With starting running back David Cobb on the sideline with a leg injury, the Gophers drove 73 yards in 5:32. The score was Williams Jr.’s second of the season.

David Cobb Opened The 2nd Half Scoring With a Touchdown Run

Minnesota closed the gap to 21-14 on a 17-yard touchdown run by David Cobb. After the Gophers’ defense forced a 3-and-out and a short punt, Minnesota struck quickly, scoring in less than 2 minutes on 4 plays. Cobb limped off the field after his score, his 12th of the season, and did not return. He finished with 80 yards on 15 carries.

Nebraska Blocked a Field Goal And Returned it For a Touchdown

Nate Gerry returned a blocked field goal 85 yards to give Nebraska a 21-7 lead. Ryan Gregory blocked the 30-yard attempt by Minnesota’s Ryan Santoso. The Gophers drove the ball 74 yards on 11 plays before the block. It was Gregory’s second block of the season. 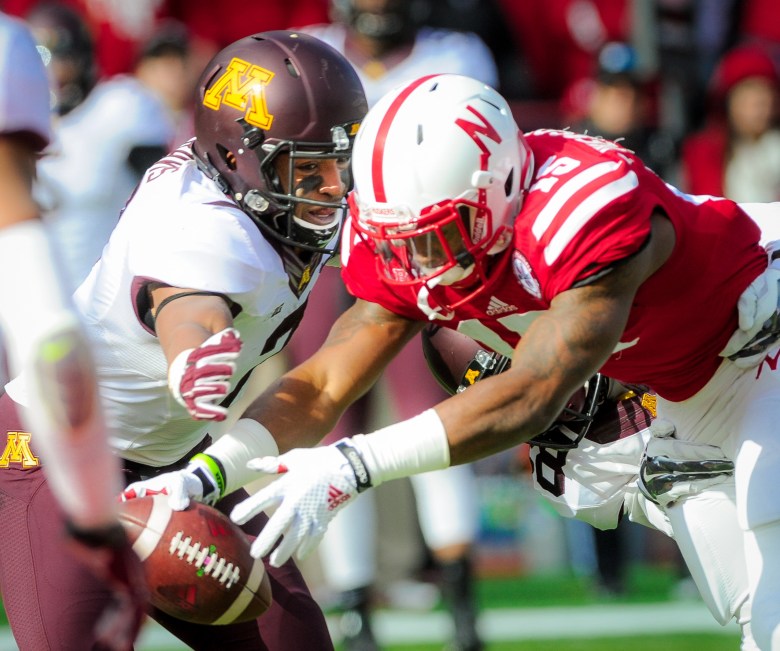 Nebraska’s De’Mornay Peirson-El reaches the ball across the goal line to score a touchdown. (Getty)

Tommy Armstrong Jr. hit De’Mornay Pierson-El for a 18-yard touchdown on a 3rd and 10 play to give the Cornhuskers a 14-7 lead early in the 2nd quarter. The play was reviewed because Pierson-El fumbled, but it was determined the ball crossed the plane of the goal line before he lost control.

Armstrong completed 12 of 19 passes for 223 yards and Pierson-El had 87 yards on 4 receptions.

Nebraska Struck First With a TD on Its Opening Drive

Ameer Abdullah scored his 18th rushing touchdown of the season on a 2-yard run to put Nebraska up 7-0. The score was set up by a 73-yard pass from Tommy Armstrong, Jr., to Kenny Bell. The completion was longest play from scrimmage for the Cornhuskers this season. Bell left the game with an injury and did not return.

Abdullah finished with 98 yards and the score on 20 carries.

The saying goes, “What have you done for me lately?”

If you ask that question to the Nebraska defense, you’re certain to get plenty of unpleasant answers.

That’s because the Cornhuskers are coming off a game in which they allowed an FBS single-game record of 408 rushing yards to Melvin Gordon of Wisconsin, and 581 total in the loss.

Minnesota, Nebraska’s opponent Saturday, and its run-heavy offensive attack will no doubt look to pick up where Wisconsin left off. Matching 581 yards might not be in the cards, but the ground game is where the Gophers are best, averaging 223 yards per contest. David Cobb leads the way with 1,350 yards and 11 touchdowns.

Behind Ameer Abdullah’s 1,319 yards and 17 scores, Nebraska boasts an even more potent rushing attack than Minnesota. The ‘Huskers average 264 ground yards per game, second best in the Big Ten.

It all gets started at Memorial Stadium in Lincoln at noon Eastern on ESPN. 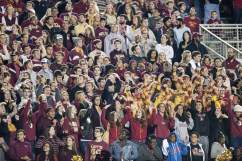 Read More
College Football, Football, Minnesota, Nebraska Football
Quarterback Mitch Leidner and No. 25 Minnesota outlasted No. 23 Nebraska on Saturday for its first win in Lincoln since 1960. Get the recap here.