The Philadelphia Eagles (9-5) are one game behind the Dallas Cowboys (10-4) for the NFC East lead. The division winner will likely be the only NFC East team to make the playoffs. While the Eagles have had one of their best seasons in recent memory, quarterback Mark Sanchez, who is replacing an injured Nick Foles, is showing that he is still the butt-fumbler and not the elite quarterback some thought he was becoming. His 61.9 percent completion rating, along with nine interceptions to go with 10 touchdowns in seven starts, may be enough to end the Eagles’ season in two weeks.

The Washington Redskins (3-11) are forced to go back to their former No. 2 overall draft pick, quarterback Robert Griffin III. Between injuries and poor performance, Griffin was benched in favor of Kirk Cousins. Cousins was then benched for Colt McCoy. After McCoy was injured and replaced by Griffin last week, Washington has to stay with Griffin on Saturday since McCoy is still not ready to play. While Griffin only has three interceptions on the season, the quarterback known for his rushing skills has three more turnovers in fumbles this year. With the Redskins out of both the playoff race and the No. 1 draft pick race, they’re biggest goal here would be to play spoiler for the Eagles.

Who:
Philadelphia Eagles vs. Washington Redskins

The Philadelphia Eagles have put together an improbable 9-5 season. Winning their next two games will tie them for their best record since 2005, but may not be enough to get them into the playoffs.

LeSean McCoy has gotten back to his rushing ways after a slow start. He is currently fourth in the league with 1,132 rushing yards. However, he will be going up against a seventh-ranked rush defense that gives up only 101 rushing yards per game.

However, if Sanchez can figure out a way to get his passes to the right players, they will likely have success. Washington gives up an average of 237.9 passing yards per game. This season, Jeremy Maclin leads the Eagles with 1,207 yards on 78 receptions. He also has 10 touchdowns, which is tied for his career high.

The Washington Redskins will likely rely heavily on their defense. Their offense is scoring only 18.4 points per game, which is good for 26th in the league — and five of those games were with McCoy under center and six were with Cousins.

Their defense can help take some pressure off the low-scoring offense if they can hold the Eagles to roughly 100 yards rushing and hope that Sanchez plays like himself. Turnovers will likely be a huge factor in this game, and if the Redskins can keep Sanchez throwing interceptions, it will be a big help for the offense — as long as Griffin doesn’t give it right back.

Both of these teams have turnover issues — especially from their quarterbacks. The team that holds on to the ball better will most likely win, but it will also come down to defenses making timely stops on those inevitable turnovers.

The Eagles will need to win to keep their playoff hopes alive, giving them a lot to play for. The Redskins have very little to play for, as they are out of the playoffs and the race for the top pick in the draft. However, they can spoil their division rival’s hopes of continuing their season into January.

In the end, it’s hard to see the Redskins finding a way to win, despite the Eagles’ recent troubles. 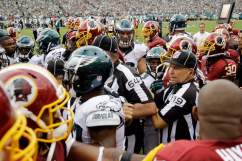 Eagles-Redskins Brawl: The Videos You Need to See