What would an NFC East game be without some fireworks? Sunday’s Eagles-Redskins clash — DeSean Jackson’s first against his former team — had plenty of them, including a brawl that broke out in the fourth quarter after Washington’s Chris Baker knocked over Eagles quarterback Nick Foles.

The scuffle spilled over to the sideline.

In the end, everything worked out just fine for the Birds.

With the game tied at 27 in the fourth quarter, Foles threw what appeared to be an interception. But the pick was overruled upon a video replay, and Foles proceeded to hit Jeremy Maclin for a 27-yard tie-breaking touchdown that put Philly on its way to a 37-34 win.

The Eagles, who staged comebacks from double-digit in Week 1 against Jacksonville and Week 2 at Indianapolis, is the first team in NFL history to start 3-0 despite trailing by 10 or more points in all three games. 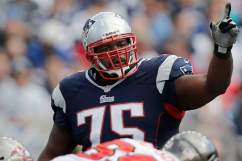