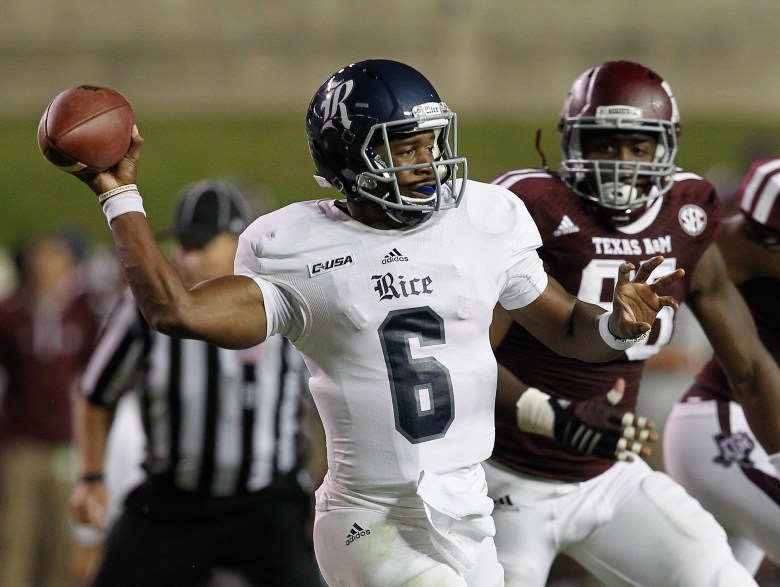 Rice quarterback Driphus Jackson has thrown for 6 touchdowns over the past 2 games. (Getty)

Teams with losing records don’t often get bowl invites. Not only is Fresno State going bowling at 6-7, but the Bulldogs will be doing so in Hawaii. A Mountain West league rule states if your team wins a division, as Fresno did in the West, you get a bowl bid. Merry Christmas, indeed. Its opponent, Rice, reeled off a mid-season, 6-game winning streak.

Behind quarterback Brian Burrell (2,576 yards, 22 touchdowns), receiver Josh Harper (86 receptions, 1,072 yards) and running back Marteze Waller (1,292 yards, 11 TDs), the Bulldogs put up 28.1 points per game. Ball-hawking safety 3-time all-conference player Derron Smith headlines the Fresno defense, which has played better the past month after a rough start to the season (0-3, 55.3 points per game allowed). In a nutshell, Fresno moves the ball well (417 yards per game), but doesn’t really exactly keep opponents out (32.6 points per game).

Rice is actually quite similar to Fresno, statistically speaking. Yardage gained, scoring offense and defense are pretty even. Quarterback Driphus Jackson has 21 touchdown passes and 8 interceptions on the year, including 6 TDs and 4 picks over the past 2 games. The Owls have probably had a tough time sleeping as they are coming off a game in which they allowed 76 points in a loss to Louisiana Tech. The defense was playing much better – 19.6 ppg over the previous 8 games – before La. Tech debacle.

Again, Rice and Fresno resemble each other in a lot of ways. In a lot of mediocre ways. Though the fact both teams started 0-3 and ended up with bowl invites is impressive. And the most impressive player on the field Christmas Eve will be Driphus Jackson, who will play his usual efficient, productive game, giving the edge to the Owls. 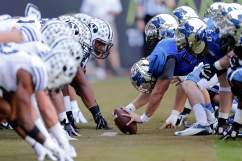 Read More
College Football, ESPN
Fresno State has the distinction of being the only team to get a bowl bid with a losing record. Can the Bulldogs beat Rice in the Hawaii Bowl to get to .500? Find out here.