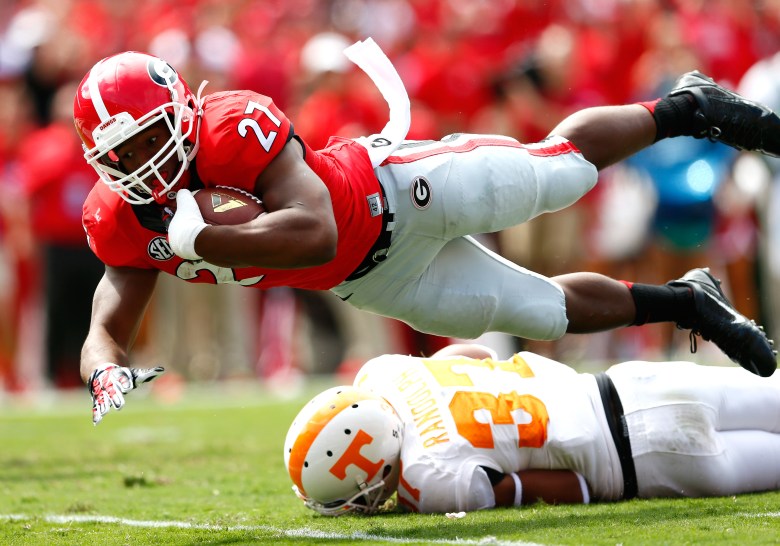 Filling in for the injured Todd Gurley, Georgia running back Nick Chubb has 1,281 yards and 12 touchdowns. (Getty)

Georgia running back Todd Gurley began the season with a bang, totaling 293 all-purpose yards in a 45-21 win over then-No. 16 Clemson.

Gurley put up Heisman-worthy numbers for the first 5 weeks until he was suspended for 4 games by the NCAA for selling memorabilia. In steps backup Nick Chubb.

Bobby Petrino‘s Cardinals, who bring a top 5 total defense into the game, are riding a 3-game winning streak

You won’t find a better ball-hawk in college football than Louisville safety Gerod Holliman. His nation-leading 14 interceptions are a handful more than the 2nd-place finisher in the FBS and he anchors UL’s stingy pass defense. So it’s probably a good thing Georgia quarterback Hutson Mason doesn’t sling the ball around. But he is an efficient passer as evidenced by his 20 touchdowns and 5 interceptions.

We know what Georgia does best on offense: Run. And as good as the Cardinals’ pass D is, their rush defense is probably better. Headlined by DE Lorenzo Mauldin, they are 2nd in the country with 93.7 yards allowed per game.

Freshman Kyle Bolin takes over at quarterback now that Will Gardner (knee) is out for the season. Bolin will lean heavily on receiver DeVante Parker, a rising NFL prospect, against Georgia’s 10th-best passing efficiency defense.

On paper, this one is pretty evenly matched. While UL’s defense is ranked highly in many categories, it hasn’t faced an offense as potent as Georgia’s. Expect UGA to stay away from Holliman (if possible) and pound away with Chubb at Louisville’s front seven, which, despite the great numbers, has shown some holes lately. Holes big enough to allow Chubb’s 5-foot-10, 228-pound frame through. He’s the difference. 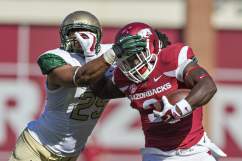