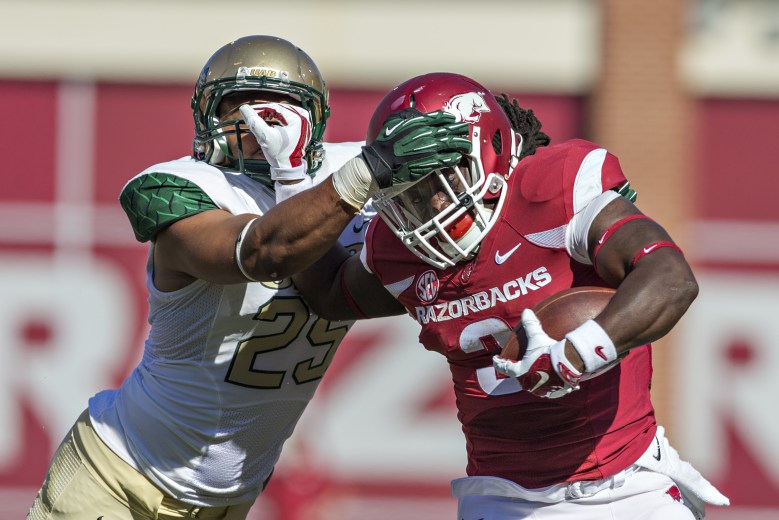 Alex Collins was one of two Arkansas running backs to run for 1,000 yards. Jonathan Collins was the other. (Getty)

Arkansas finished last in the SEC West this year. Take a glance at the Razorbacks’ schedule and you’ll see why.

‘Hogs head coach Bert Bielema came from Wisconsin and brought the Badgers style of play with him to Fayetteville – power running and strong defense. It’s beginning to work.

Quarterback Tyrone Swoopes has been so-so at best in his first year as the Longhorns quarterback. But he hasn’t gotten much help from the running game and the offense finished tied for 101st in the nation in scoring at 22.6 points per game. Meanwhile, the Razorbacks scored 32 per contest.

The lackluster Longhorn offense might have trouble vs. Arkansas’ D, which, as I mentioned earlier, shut out LSU and Ole Miss, and held Alabama to 14 points and Mississippi State 17. Arkansas played better than a 6-6 team in most games.

Strong is going to have Texas ready to play. But his team doesn’t match up very well against Bielema’s squad. Make no mistake, Arkansas is no Alabama. But the Razorbacks have taken their beatings – and given out a few – and are more prepped for this game. 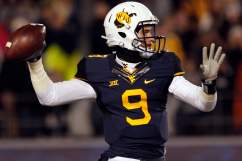