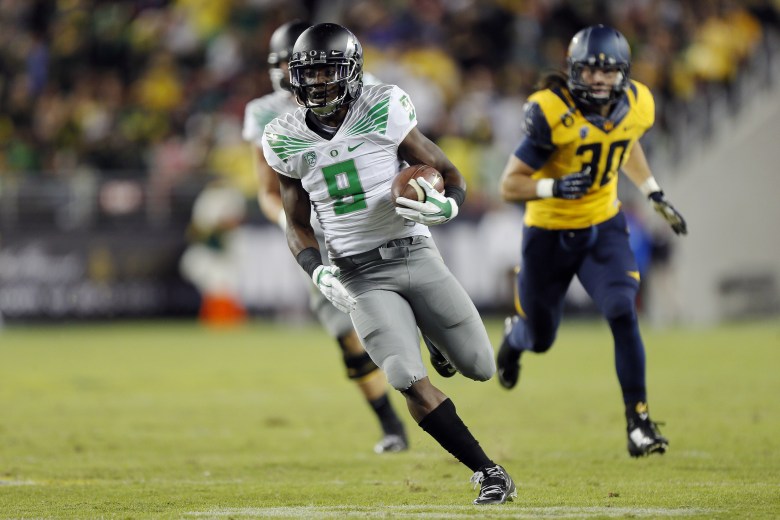 Whether he’s running pass routes for Marcus Mariota or lined up in the backfield waiting for a handoff, Byron Marshall is a threat to opposing defenses.

The junior from California is a do-it-all for the Ducks, who face Ohio State in Monday’s first-ever College Football Playoff National Championship Game.

Here’s what you need to know about Marshall:

When your starting quarterback is the Heisman Trophy winner, you can expect to see a lot of passes. Mariota went to Marshall the most of any receiving option. Marshall has a team-leading 66 receptions for 834 yards and 5 touchdowns (tied for 3rd).

His best game came in the opener against South Dakota when he caught 8 passes for 138 yards and 2 scores. You can see one of the TDs in the above clip.

Byron Marshall 2013 HighlightsI do not own any of these video clips as they belong to the Pac-12 Network and their broadcast partners. No monetary value is derived from this video. It is only for the enjoyment of Oregon Duck football fans who have no access to television such as the folks in the Armed Forces around the…2014-01-25T18:09:45.000Z

Marshall is technically a running back. At Valley Christian High in San Jose, Calif., he ran for 3,309 yards from his final 3 seasons. At Oregon, he was officially moved to receiver in October.

With freshman running back Royce Freeman in town, it enabled the Ducks to use Marshall’s versatility as a wideout. There was also a need for receivers at the time. And there is again.

3. Marshall Will Need to Step Up His Game With 2 WRs Out Monday 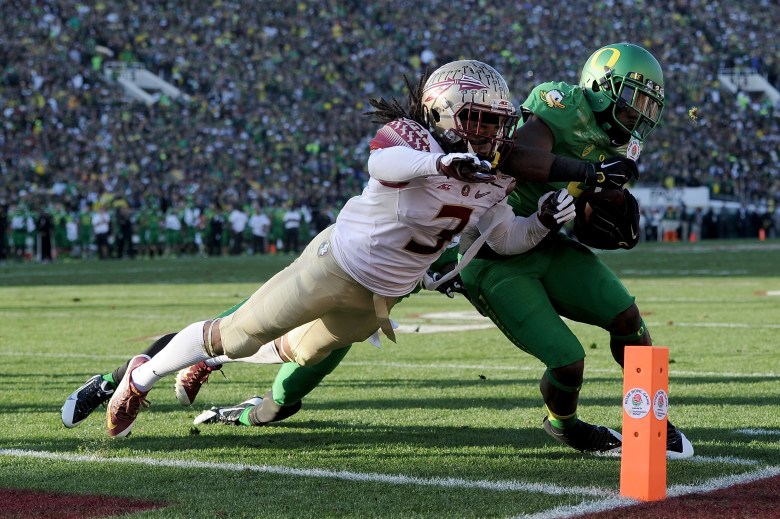 Marshall had 5 catches for 20 yards in the semifinal win vs. Florida State. (Getty)

Marshall was the top target all season, but will need to step up his game even more now that the Ducks will be without their No. 2 and 3 receivers. Darren Carrington, who was second on the team with 704 yards, is ineligible after failing an NCAA-administered drug test. He tested positive for marijuana.

Devon Allen had 41 catches and a team-best 7 receiving touchdowns, but will miss the title game after injuring his knee on the opening kickoff of the Rose Bowl vs. Florida State.

4. Marshall Is Getting an NFL Draft Evaluation 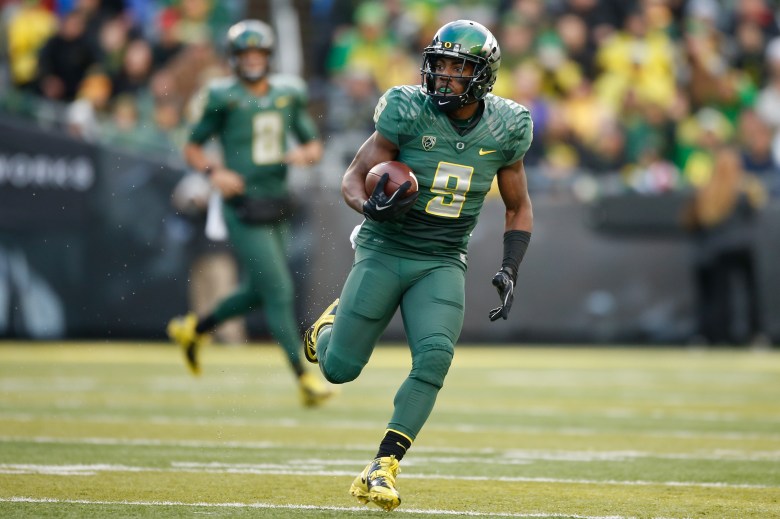 After Monday’s game, Marshall has said he will seek an NFL Draft evaluation to get a gauge on his draft stock.

The NFL Draft Advisory Board gives out grades to juniors seeking more information about whether to go pro early.

Said Marshall to The Oregonian:

“I want to sit down with my pops and some of the coaches here and see what they feel and see how my pops feels and whatever is smart. I’m not going to make no stupid decision and leave early and go as a free agent because that makes absolutely no sense. But I want to make sure that if I leave it’s worth leaving.”

5. Marshall Was Interviewed by TMZ

When you make it to TMZ as a college athlete, you’ve hit the big time. A reporter caught up with Marshall, who was signing autographs for fans, and asked him a variety of questions.

Most notably, what does Marcus Mariota do after a win?