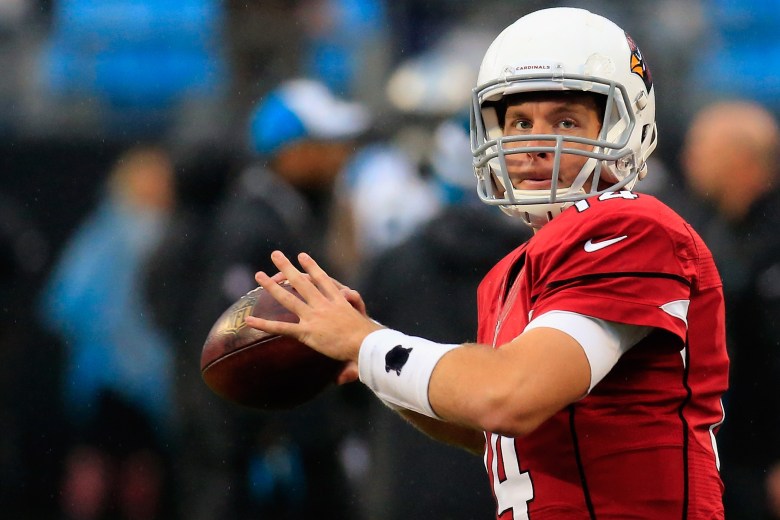 Carolina won the game, but will have to wait until tomorrow night to know who they will play next week. Depending on what happens with the Cowboys and Lions, they will be in either Seattle or Green Bay. Arizona, on the other hand, will not become the first team in NFL history to play the Super Bowl at home.

Carolina’s defense held Arizona to under 100 yards, and their offense put together almost 400.

Cam Newton finally got his first-career playoff win and finished the game with 198 yards and two touchdowns passing and 35 yards rushing. He also threw one interception. Jonathan Stewart rushed for 122 yards and a touchdown.

Carolina and their dismal season will live to see at least one more game.

Read on for highlights and go here for the live box score.

The 1st Points Went to the Panthers

A poor Cardinals punt gave the Panthers great field position and led to a field goal — the first points of the 2015 NFL Playoffs. The score was a 49-yarder from Graham Gano.

The Panthers Added a Touchdown

Carolina scored on a 13-yard run from Jonathan Stewart to go up 10-0 early in the game.

The Cardinals Answered With a Touchdown

Darren Fells caught the touchdown pass from Ryan Lindley from 1 yard out, the vine of which can be seen above, to get Arizona on the board.

The drive began with Carolina muffing the punt, which can be seen above.

Antonio Cromartie intercepted Cam Newton at Arizona’s 33-yard line and returned it to the Carolina 17-yard line. The vine can be seen above.

Newton’s interception led to Arizona’s second touchdown and first lead of the game. Marion Grice scored on a 1-yard rush. The vine can be seen above.

.@GrahamGano's 39-yard field goal is good and the #Panthers trail Arizona 14-13 with 0:15 left in the half. #AZvsCAR pic.twitter.com/Ks5WUa5hyf

Gano hit from 39 yards out to make it a one-point game right before the half.

Neither team looks like much of a playoff contender, which could have been predicted just by looking at their records.

Both were handed drives with excellent field position and don’t have much to show. Carolina missed what should have been a sure field goal and both of Arizona’s touchdowns came off of turnovers.

Carolina Took the Lead With Another Touchdown

Fozzy Wittaker scored on a 39-yard pass and run to give the Panthers the lead.

This touchdown came on a 1-yard pass from Newton to Mike Tolbert.

The drive was started with a fumbled kickoff, which can be seen above.

The Arizona Cardinals’ reward for having one of the best regular seasons in franchise history is a road playoff game in which Arizona will likely have to start third-string quarterback Ryan Lindley.

Lindley will likely be under center next week when Arizona takes on the Carolina Panthers, who blew out the Atlanta Falcons Sunday to win the NFC South title despite finishing with a 7-8-1 record.

Drew Stanton, who took over for Carson Palmer after Palmer suffered a season-ending knee injury, missed the last two games of the regular season with a leg infection. His status is uncertain for next weekend.

The oddsmakers are taking a dim view of the Cardinals’ quarterbacking situation, listing Arizona as a 5-point underdog despite having three more regular season wins than Carolina. 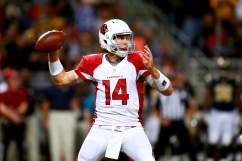