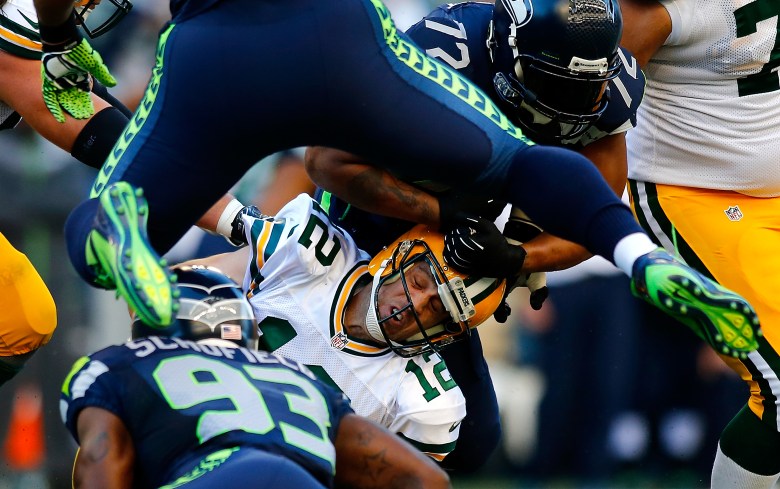 Seattle and Green Bay met in the season-opener and the Seahawks stifled Aaron Rodgers and the Packers in a 36-16 win. (Getty)

Seattle and Green Bay have already played this season, kicking off the 2014 NFL slate on a Thursday night opener.

It was the first game of the season, not a must-win. You lose and you look to get back on track in Week 2.

But when the Seahawks and Packers meet again Sunday, it is a must-win. You lose and you go home until Week 1 of next season.

The teams tangle in Seattle in the NFC Championship with a trip to the Super Bowl on the line.

The Seahawks, 25-2 at home since 2012, are hoping for a repeat performance as they are trying to defend their Super Bowl championship from a season ago.

The Packers, 8-1 in their last 9 games, are obviously hoping to flip the script and write a different ending.

MVP front-runner Aaron Rodgers has been ridiculously good this season. After a so-so start to the season, he decided to “R-E-L-A-X” and really turned it on. His 38 touchdown passes were 3rd in the league and his 5 interceptions were the fewest among qualified leaders. He and Jordy Nelson have developed quite a rapport, becoming one of the top tandoms in the league. And if it’s not Nelson, Randall Cobb and the emerging rookie Davante Adams will make defenses pay.

Running back Eddie Lacy has averaged 5.2 yards per carry over the past 5 games. And he’s fresh – he’s only cracked the 20-carry threshold once in those 5 contests.

The Seahawks gave up 2 touchdowns in last week’s win over Carolina, but in their prior 6 games they gave up 3 TDs total. Ridiculous.

Russell Wilson has a no-name cast of receivers (Doug Baldwin? Jermaine Kearse?), but it hasn’t seemed to bother the young QB as he’s thrown for 10 TDs and just 2 INTs in the team’s 7-game winning streak.

But what makes this offense go is the running game. Wilson has run for 849 yards (best among NFL QBs) and Marshawn Lynch ran for 1,306 yards and tied for an NFL-best 13 rushing scores. Green Bay allowed nearly 120 yards per game on the ground and just gave up 145 last week to the Cowboys.

The Seahawks are playing better than any other team in the league. The Packers are playing lights out as well, but they aren’t winning as convincingly as Seattle.

It’s a matchup of the best defense vs. the top offense. You can’t ask for much more than that.

The bottom line is the Seahawks don’t lose at CenturyLink Field. That crowd actually does make a difference. They register on seismic activity charts for crying out loud.

No offense to the fans, but you’re not the reason Seattle is going to win; the Seahawks are just better than the Packers. And they’re going to their second-straight Super Bowl. 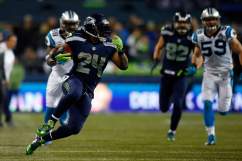