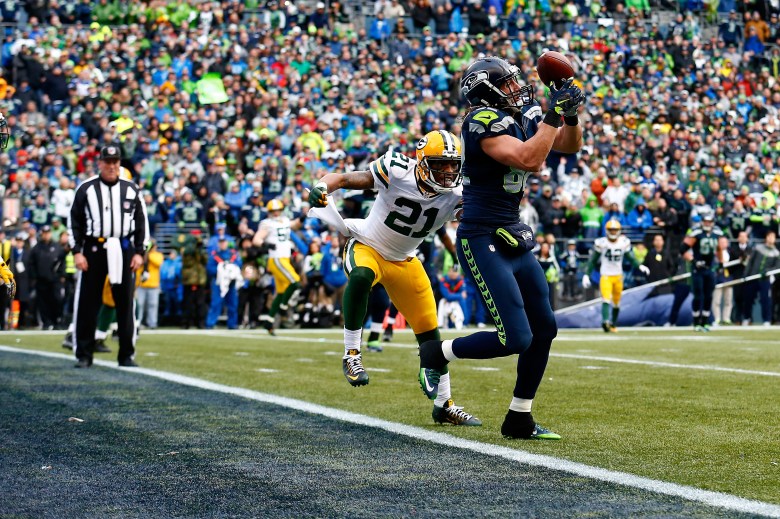 Russell Wilson picked the perfect time to snap out of a bad game. And now the Seattle Seahawks are going back to the Super Bowl to defend their title.

The 3rd-year quarterback hit Jermaine Kearse on a 35-yard touchdown pass on the first possession of overtime to give the Seahawks an improbable 28-22 win over the Green Bay Packers in the NFC Championship Game on Sunday.

Wilson had thrown 4 interceptions, but led Seattle on 2 scoring drives late in the 4th quarter to erase a 19-7 deficit. After a 1-yard TD run by Wilson cut the lead to 19-14, the Seahawks recovered an onsides kick just before the 2-minute warning. Three plays later, Marshawn Lynch took it in from 24 yards out for Seattle’s first lead 22-19 after the 2-point conversion.

But the Packers weren’t finished. Mason Crosby’s 48-yard field with 14 seconds left in regulation tied the game and sent it to the extra period. Green Bay never got the ball in OT as Seattle won in walk-off style.

Get all the stats and a complete boxscore here: 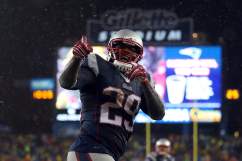 The Packers Struck First With a Field Goal in The 1st Quarter, Then Recovered a Fumble on The Ensuing Kickoff

On the game’s opening possession, the Packers drove to the Seattle 29-yard line, but Richard Sherman jumped in front of Davonte Adams and intercepted an Aaron Rodgers pass in the end zone on a 3rd and 10 play.

But on Seattle’s 3rd play from scrimmage, Russell Wilson was intercepted by Ha Ha Clinton-Dix on a deflection and the Pack got the ball inside the Seahawks’ 20. That play set up the first score of the game.

After taking over at the Seattle 19, Green Bay had to settle for an 18-yard Mason Crosby field goal and a 3-0 lead with just over 8 minutes left in the 1st quarter.

The Seahawks stopped 2 rush attempts from 1-yard out to force the field goal. John Kuhn ran for what was called a touchdown, but replay reversed the call, saying Kuhn’s elbow was down. Eddie Lacy was then stopped on 3rd.

On the ensuing kickoff, Doug Baldwin fumbled and the Pack got it back at the Seahawks’ 23.

After Morgan Burnett recovered Baldwin’s fumble on the kickoff at the Seattle 23, the Seahawks’ defense held the Packers out of the end zone and forced another Crosby field goal, this one from 19 yards out.

Julius Peppers and the Green Bay D forced a Seattle punt on the next possession. Peppers had a sack of Wilson.

Rodgers hit Randall Cobb for a 13-yard touchdown on the final play of the 1st quarter to give Green Bay a 13-0 lead.

On the ensuing drive following Crosby’s 3rd field goal to make it 16-0, Clinton-Dix picked off Wilson for the 2nd time, giving Green Bay the ball back on its own 44. Clay Matthews was called for a penalty for his hit on Wilson during the return.

But the Seahawks took it right back when Byron Marshall intercepted Rodgers, his 2nd of the game.

Seattle took over at its own 31.

The interceptions weren’t done, though. Seattle mounted a drive and got the ball into Green Bay territory at the 2-minute warning. But on the next play, Wilson threw his 3rd pick of the game, this one in the end zone to Sam Shields. Three possessions, three interceptions.

After a Matthews sack of Wilson (below), Seattle faced a 2nd and 30 at its own 41. Marshawn Lynch ran for 11 yards then the Seahawks picked up the 1st down when Wilson found Baldwin for 29 yards on 3rd down to the Green Bay 19.

The Packers held and forced the field goal attempt, but the Seahawks’ fake worked to perfection.

Crosby nailed a 48-yard field goal, his 4th of the game, to give the Packers a 19-7 lead with just under 11 remaining in the game.

After the Seahawks grabbed some momentum with a touchdown on a fake field and a defensive stop, the Packers’ defense stepped up and held Seattle from moving the ball.

James Starks had a 32-yard run on the drive which put the Packers in Seattle territory.

On the ensuing drive, the Seahawks got to the Green Bay 45, but Wilson was sacked then Seattle was forced to punt.

Russell Wilson Threw His 4th Interception on a 4th-Quarter Drive

Burnett intercepted Wilson on another deflected pass in the 4th quarter. It was Wilson’s career-high 4th pick of the game. It came with just over 5 minutes remaining in the game.

Receiver Jermaine Kearse was the intended target on all 4 INTs.

Russell Wilson Scored on a 1-Yard Run, Then Seattle Recovered The Onsides Kick

After a near touchdown by Marshawn Lynch was called back (below), Wilson scored on a 1-yard keeper to cut Green Bay’s lead to 19-14 with 2:09 left in the game.

Then Chris Matthews recovered the ensuing onsides kick to give Seattle the ball at the 50. The Packers’ Brandon Bostick had a chance grab it, but it bounced off his hands and Matthews was able to corral it.

Marshawn Lynch Ran For a TD With 1:25 Remaining to Give Seattle The Lead

After getting the onsides kick, Lynch ran it in from 24 yards out to give Seattle its first lead late in the 4th quarter.

Luke Willson converted the 2-point conversion when he caught Wilson’s up-for-grabs heave from across the field.

Crosby kicked a 48-yard field goal with 14 seconds remaining in regulation to tie the score at 22. It was his 5th field goal of the game.

The Seahawks took a knee to send the game into overtime.

Kearse caught a 35-yard touchdown from Wilson on the first drive in overtime to give Seattle a 28-22 win.

Since Seattle scored a touchdown, by rule the game was over without Green Bay getting a possession. 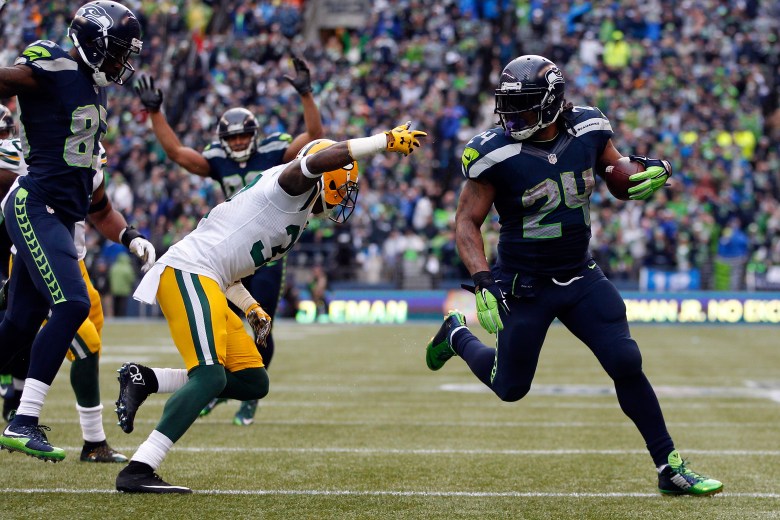 Lynch ran for 157 yards and a touchdown on 24 carries.

Baldwin led the way with 106 yards on 6 receptions.

Rodgers threw for just 178 yards on 19-for-34 passing GB. He had 1 touchdown and 2 interceptions.

Randall Cobb had 7 grabs for 62 yards and a score and Jordy Nelson finished with 5 receptions for 71 yards.

Preview: The Packers & Seahawks Set to Battle For A Spot in The Super Bowl

The Arizona Cardinals and the Dallas Cowboys.

The only 2 teams who have beaten the Seattle Seahawks at their CenturyLink Field home since the beginning of the 2012 season.

Sunday in the NFC Championship Game, the Green Bay Packers (13-4) will try to become just the 3rd team in 3 seasons to pull off a victory in one of the toughest venues in the NFL.

The Packers have fallen victim twice to the Seahawks in their impressive home run – once this season and in 2012.