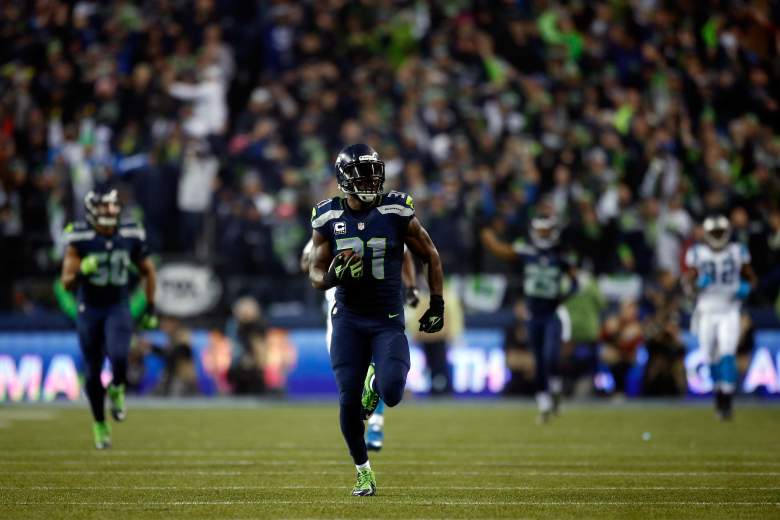 Kam Chancellor returns an interception for a score in the NFC playoffs. (Getty)

In one of the most – if not the most – anticipated on-field matchups in Sunday’s Super Bowl, all-world tight end Rob Gronkowski of the New England Patriots squares off with Seattle’s Legion of Boom, most notably safety Kam Chancellor.

At 6-foot-3, 232 pounds, Chancellor really is the “boom” in the Legion of Boom. The strong safety can pack a wallop on ball carriers and his remarkable athleticism allows him to be a better-than-average pass defender.

How’s this for athleticism?

Gronk is a freak athlete in his own right. At 6-6, 265 pounds with sub-4.7 speed and brute physicality, he is a matchup nightmare for opposing defenses. He is Tom Brady‘s go-to guy. Just as important as the primary target on a designed deep seam play as he is as a 3rd down safety valve.

Covering Gronkowski with a single safety always favors New England. Will the Seahawks do that? Not if they want to win they won’t.

“We have an excellent opportunity to match up as good as anybody. Kam Chancellor’s about as big a strong safety as you can find. It’s just about bodies on bodies, you know? We’ll have to play him a number of different ways to have a chance to slow him down.”

That doesn’t sound like a coach who is going to leave Chancellor on an island with Gronkowski all game.

And that’s a wise move because Gronk is winning that battle 7 out of 10 times. Maybe 8.

In fact, tight ends have scored 11 TDs vs. the Seahawks this season. That’s not all on Chancellor, but it’s a red flag for the defense. And you can bet Brady and offensive coordinator Josh McDaniels are aware of it.

Expect Carroll and defensive coordinator Dan Quinn to give Brady and Gronkowski plenty of different looks and coverages.

Queue free safety Earl Thomas. Gronk does most of his damage over the middle of the field and you can guarantee Chancellor is going to have help from Thomas in that area.

Seattle’s K.J. Wright, Bruce Irvin and Bobby Wagner form one of the better groups of coverage linebackers in the league. Wright and Irvin will likely get their cracks at the tight end, though that shouldn’t happen too often if the Seahawks know what’s good for them.

Not letting Gronkowski get a free release off the line is key. Whether it’s Chancellor, Wright, Irvin or someone else, you have to disrupt Gronk’s pattern and knock off his and Brady’s timing.

Seattle needs cornerbacks Richard Sherman and Byron Maxwell to win their one-on-one matchups on the outside with Patriots receivers Brandon LaFell, Julian Edelman and Danny Amendola. If they can shut down the outside passing game and shrink the pitch-and-catch area for Brady and Gronkowski, stopping – slowing, rather – him is that much easier.

One-on-one, the Gronkowski-Chancellor matchup undoubtedly goes to Gronk and the Patriots.

But if you’re tuning in to see a game of these two going at it every play, you’re going to be disappointed because it’s not happening.

And that’s going to be to Seattle’s advantage.