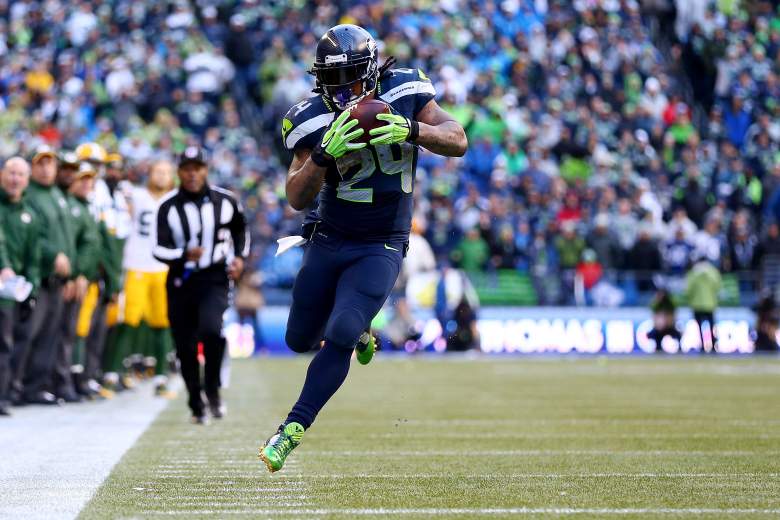 Marshawn Lynch and the Seattle Seahawks are looking to become the first back-to-back Super Bowl champions since the Patriots, their Sunday opponent, did it in 2004 and 2005.

Ten years ago, the New England Patriots took to the field in Super Bowl XXXIX against the Philadelphia Eagles looking to repeat as NFL champions.

Fast forward to the present day.

The Patriots are back in the Super Bowl, but this time they’re trying to prevent the repeat, which would be the first since they accomplished the feat in Jacksonville’s Alltel Stadium.

The challenge: The Seattle Seahawks.

Seattle pulverized Peyton Manning and the Broncos in Super Bowl 48 by the totally unexpected and head-scratching score of 43-8.

Sunday in Glendale, Arizona, the Seahawks will look to join the Patriots, Broncos, Cowboys, 49ers, Steelers (twice), Dolphins and Packers as two-in-a-row champs in the Super Bowl era.

Pete Carroll has his Seahawks riding an 8-game winning streak fueled by a suffocating defense.

Bill Belichick‘s Patriots, while surrounded in the Deflategate controversy, are clicking offensively at the right time.

So what will? Let’s keep it moving and find out:

Seattle has been quietly putting on one of the most impressive displays of defense we’ve seen in quite some time. Especially in the points-happy league the NFL has become. During the Seahawks’ 8-game winning streak, they’ve allowed just 6 touchdowns. Six TDs in 8 full games. Let that sink in. Sunk? OK, then. Oh, and one of those touchdowns came in garbage time in the NFC Divisional win over Carolina. And they just held the highest-scoring offense in the league (the Packers) to 1 touchdown and 300 yards in the NFC Championship.

Lately on offense the Seahawks really haven’t had to do much with the D dominating the way it has. But they’ve scored 24.1 points per game during the 8-game streak. That’d be close to top 10 during the regular season. So it’s safe to say they’re getting the job done as well.

This offense is best when quarterback Russell Wilson and running back Marshawn Lynch can get in space and the offensive line does what they get paid to do. The NFC Championship win over Green Bay is a perfect example. For 58 minutes it looked like the Packers were going to the Super Bowl. Then Wilson and Lynch made a few plays and … boom! Just like that, Seattle won. You also have to credit offensive coordinator Darrell Bevell’s creativity.

Let’s face it, the Seahawks don’t exactly have a set of receivers that’ll strike fear into opposing defenses. But they play smart, know their limitations and catch the ball when Wilson throws it to them. Can’t ask for much more than that.

Scoring just 17 points in each of their final 2 regular season games, it appeared the Patriots’ offense was hitting a wall. Well, if it was hitting a wall, Tom Brady and Co. have gone into wrecking ball-mode, totaling 80 points in their 2 playoff wins.

Under-inflated balls or not, Brady has thrown 6 touchdowns as the Pats have converted an eye-popping 18 of 29 3rd downs vs. the Ravens and Colts. We know about Rob Gronkowski and Julian Edelman, but Brandon LaFell has quietly become a factor in the postseason. New England will need as many receiving contributors it can get vs. Seattle’s vaunted Legion of Boom. An appearance from Danny Amendola wouldn’t hurt, either.

A week after rushing for a total of 3 feet vs. Baltimore, LeGarrette Blount smashed his way to 148 yards and 3 touchdowns in the AFC title game against Indy. The Colts are a bit softer up front than Seattle (OK, a lot softer), but the Patriots can’t be one-dimensional and expect to win.

The Patriots turned the ball over a league-low 13 times (9 interceptions, 4 fumbles) and their +12 turnover differential was tied for 2nd. Seattle was right behind New England.

This is the best defense the Patriots have had in a handful of years. Darrelle Revis and Devin McCourty have solidified a once-shaky secondary (top 10 in completion percentage and passer rating) and the defense allowed just 6 rushing touchdowns all season (tied for 2nd).

It’s been a rather wild ride since Championship Weekend – Deflategate, a second-consecutive competitive Pro Bowl, Super Bowl Media Day, Richard Sherman and the most famous unborn child of all time – but it’s finally time to find out who’s the best in the NFL.

While the game these days features pass-happy, high-scoring offenses, defense still wins. Well, dominating defenses do. That’s what the Seahawks are bringing into Super Bowl XLIX.

And despite a 5-foot-11 quarterback, a running back who could pass for Lil’ Jon and a cast of receivers who probably aren’t recognized in their local Starbucks, Seattle can score some points. But this team has that much-needed unselfish, “lunch-pail” mentality.

Don’t get me wrong – the Patriots are riding high and are one of the most successful teams since the turn of the century. Seattle will have its hands full with Brady, Gronk, Edelman and Blount.

This game is going to be close. But, as I said earlier, great defense still gets the job done in the NFL. And Seattle’s great defense will be just that much better than New England’s great offense.