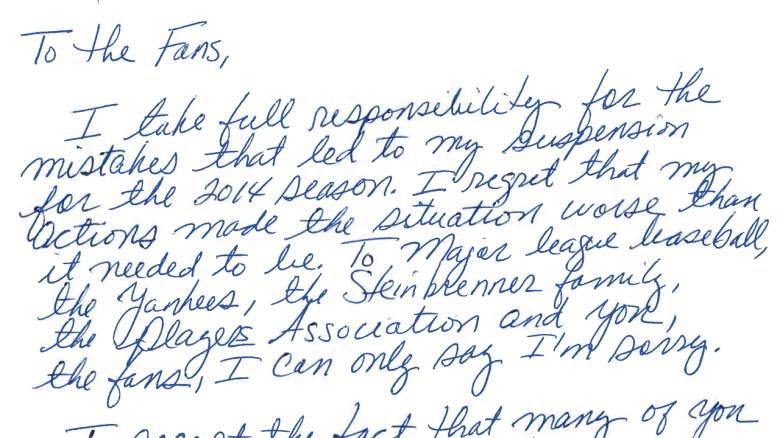 Alex Rodriguez issued a hand-written public apology regarding his role in the Biogenesis doping scandal. (Facebook)

The public note surfaced just hours after Anthony Bosch, the former owner of Biogenesis, was sentenced to 4 years in a Miami federal prison.

A-Rod opened his letter with the following:

I take full responsibility for the mistakes that led to my suspension for the 2014 season. I regret that my actions made the situation worse than it needed to be. To Major League Baseball, the Yankees, the Steinbrenner family, the Players Association and you, the fans, I can only say I’m sorry.

He was suspended for the entire 2014 season after Major League Baseball claimed to have evidence Rodriguez not only obtained illegal performance-enhancing substances from Bosch, but also attempted to obstruct their investigation.

MLB had looked for a 211-game suspension, but it was reduced to 162 by an arbitrator in January 2014. It is the longest drug suspension in baseball history.

I accept the fact that many of you will not believe my apology or anything that I say at this point. I understand why and that’s on me. It was gracious of the Yankees to offer me the use of Yankee Stadium for this apology but I decided the next time I am in Yankee Stadium, I should be in pinstripes doing my job.

Rodriguez acknowledged he isn’t a lock to be on the Yankees’ Opening Day roster in his closing:

This game has been my single passion since I was a teenager. When I go to Spring Training, I will do everything I can to be the best player and teammate possible, earn a spot on the Yankees and help us win.

A-Rod doping scandal: "60 Minutes" speaks to alleged drug supplierAnthony Bosch, the key witness against Alex Rodriguez, told his story to Scott Pelley on Sunday night's "60 Minutes." Pelley joins the "CBS This Morning" co-hosts to discuss Rodriguez's suspension and why Bosch is no longer denying the allegations.2014-01-13T14:00:47.000Z 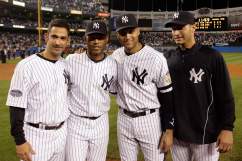