John Calipari is trying to lead the Kentucky Wildcats to the first perfect season in NCAA men’s basketball since coach Bob Knight and the Indiana Hoosiers pulled off the feat in 1975-76.

Calipari, 56, has taken Kentucky back to the pinnacle of college basketball since becoming the Wildcats’ coach in 2009. He won the first National Championship of his career, and the eighth in Kentucky’s history, in 2011. A Pennsylvania native, Calipari has established himself as one of the nation’s top recruiters, consistently bringing in classes full of All-Americans destined to leave for the NBA after one or two seasons.

Known as a “players’ coach,” Calipari’s team is considered the most talented in the country, though experts say the the odds of pulling off a rare undefeated season are against them.

Here’s what you need to know about Kentucky’s coach:

1. Calipari Has More Than 600 Career Wins

In his 23-year college coaching career, Calipari has won more than 600 games and taken 15 teams to the NCAA tournament. He won his 600th game this season in a November victory over Kansas.

Calipari has coached at UMass and Memphis, and also made a stop in the NBA with the New Jersey Nets. He was named Kentucky’s head coach in 2009 and led the Wildcats to a National Championship three years later.

While Calipari is one of the winnigest coaches in college basketball, his career hasn’t been without controversy. His two other Final Four runs, at UMass and Memphis, were vacated because of NCAA rules violations, though Calipari was not personally implicated in either case. 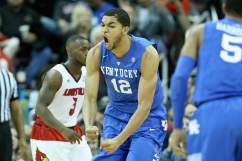 2. Calipari Is a Finalist For the Hall of Fame

“Coach Cal” was named in February as a finalist for the 2015 Naismith Basketball Hall of Fame. Calipari told ESPN:

I’m at a loss for words. I want to thank the Naismith Memorial Basketball Hall of Fame committee for even considering me. The process is by no means over — I’m just a finalist at this point — but to even be mentioned as a finalist among these worthy candidates is an unbelievable honor. I am absolutely humbled by this.

Calipari is one of 12 finalists for induction. The class will be announced April 6.

3. Calipari Is Married With 3 Children

Calipari met his wife, Ellen, while working as a volunteer assistant at Kansas. She was a secretary in the athletic department’s business office. The Caliparis have two daughters, Erin and Megan, and a son, Bradley.

Erin played college basketball at UMass and in 2013 earned a doctorate in neuropharmacolgy from Wake Forest. Megan graduated from the Cambridge School of Culinary Arts and is a French pastry chef. Bradley is a high school junior at the MacDuffie School in Massachusetts, where he plays basketball.

4. Calipari Is Making $6.5 million This Year, Plus Bonuses

Calipari is being paid $6.5 million for the 2014-15 season, but his pay is set to increase after signing a contract extension in 2014. He is set to make $7.25 million in 2015-16, $7.75 million in 2016-17 and $8 million over the final three years of the contract. He is also eligible for yearly bonuses based on the academic performance of his players and for staying at the school.

Calipari is among the highest paid coaches in college basketball. Only Duke’s Mike Krzyzewski makes more. Calipari’s base contract is $400,000 per year, with most of the money he earns coming from endorsement deals and media obligations, according to NBC Sports.

When Calipari signed his first contract with Kentucky in 2009, the deal also included two cars (plus mileage) and membership and dues for a country club of his choice, according to ESPN.

Public records show that in 2009, Calipari bought a $2.3 million home in Lexington, Kentucky shortly after his family sold their Memphis home for $1.425 million, at a loss of $70,000, according to the Commercial Appeal.

5. Calipari Was a Point Guard in College 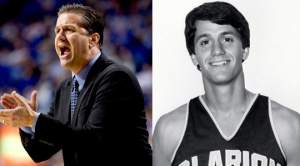 Calipari played point guard for at University of North Carolina-Wilmington, a Division 1 school, before transferring to Clarion University in Pennsylvania, a Division 2 school. In 1995, Calipari was inducted into Clarion’s Hall of Fame.

“The old saying was point guards are a dime a dozen,” Calipari’s head coach Joe DeGregorio told the Lexington Herald Leader in 2009. “Well, point guards who know what they’re doing are not a dime a dozen. He had a great feel for the game and he knew how the game was supposed to be played.”

Calipari told USA Today in 2013 that he wants his players to be less selfish than he was.