Katie Nolan on the set of “Fantasy Football Uncensored.” (instagram/@natiekolan)

Katie Nolan is a Digital Correspondent for Fox Sports and her new show “Garbage Time” debuts on Fox Sports 1 on March 15th at 9:30 p.m. ET. She is also a co-host for “Crowd Goes Wild.”

Nolan attended Framingham High School and graduated from Hofstra University in 2009 with a degree in public relations, although the career path she eventually took was much different than the more traditional one a PR major would take.

Her big break was hosting the web show “Guyism Speed Round” on Guyism.com, a five-minute show that covered the day’s sports news but with a sarcastic and funny spin. She was a writer and editor for the website, but she produced “Speed Round,” which meant she did the research and content writing (including jokes) for the series.

After she left the website, she started hosting “No Filter,” a sports and pop culture comedy show on her YouTube channel. She has been a correspondent for G4’s “Attack of the Show” and at 2012 Boston Comic Con during the Viewer Army segment of the show.

Nolan’s popularity is on the rise, and she is known for her outgoing personality. She is a die-hard Boston sports fan — a huge fan of the Boston Red Sox, New England Patriots and Boston Bruins — and can regularly be seen supporting her favorite players or attending games.

3. Fox Sports Stole Her in the Middle of the Night

Nolan first signed on with Fox Sports in July 2013. Fox agreed to let Nolan continue her web show, which the company also has on its website. Although Nolan was not featured heavily during Fox Sports 1’s initial launch last summer, her, as well as other on-air anchors Molly McGrath and Julie Stewart-Binks, have grown in popularity and become a staple for the network.

Each of Fox Sports’ female journalists are versatile. They can do reporting, anchoring and host network programming. Oh, and they’re beautiful too.

Connolly in the HBO show plays “E” (Eric), the best friend of the shows main character Vincent Chase played by Adrian Grenier. Connolly is a huge hockey fan, specifically an Islanders fan, so he tweets about hockey a lot. In May 2012, Nolan tweeted at Connolly, which led to Connolly responding to Nolan through a direct message.

The two flirted through Twitter — friendly flirting, not romantic flirting — and Nolan gushed about the friendly crush she had. Controversy later ensued and Connolly responded to the criticism directly on Facebook through a series of questionable comments and later found her friends and attacked them as well.

Recently, Nolan went on Grantland Editor-in-chief Bill Simmons’ BS Report podcast Around the 58-minute mark, Simmons admitted that he tried to hire her for Grantland. The contract negotiations never materialized, but that wasn’t the only thing that failed to materialize — a blockbuster media trade almost happened. Simmons is an NBA nerd and loves talking in NBA trade talk, so the exchange between him and Nolan is classic Simmons.

ESPN agreed to let Ian Drake help out Fox’s soccer coverage, but balked when Fox also asked for Marty Smith in the trade too.

Nolan eventually played if off lightly in the exchange with Simmons saying: “contracts happen.” She also responded to the fallout of the revelation admirably by doing what she usually does best… making jokes about the situation on Twitter.

SOURCES: K. Nolan to be traded to Lifetime Network for a "Movie of the Week" to be named later #hotstove

Nolan’s probably worth two “Movies of the Week” as well as future 1st-round draft picks. 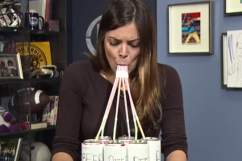